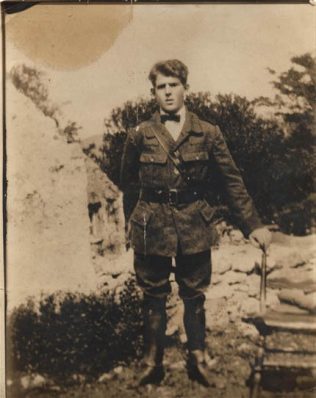 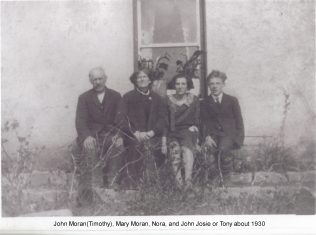 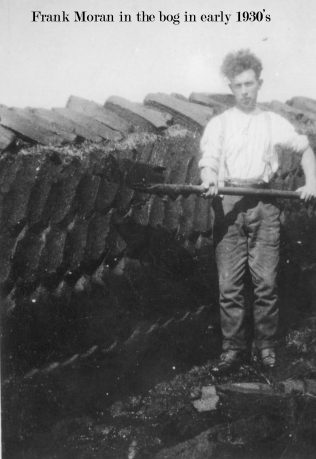 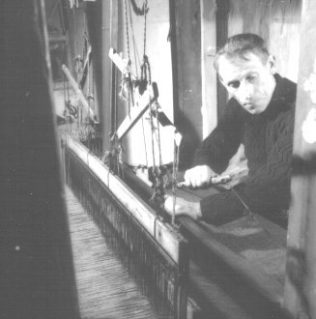 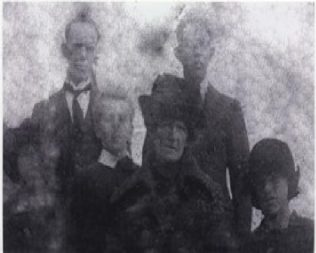 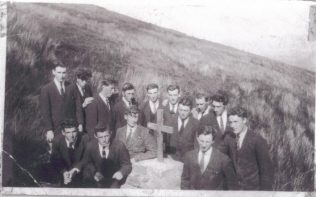 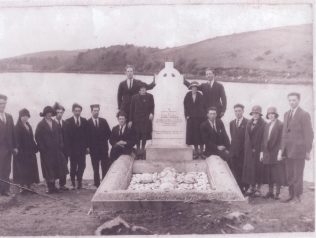 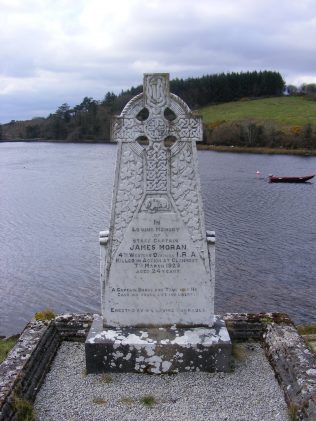 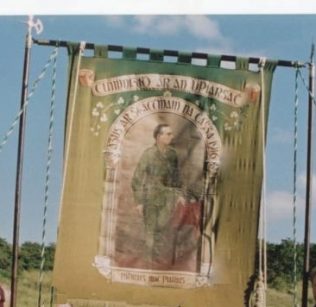 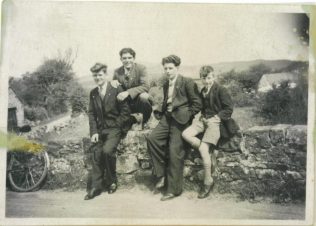 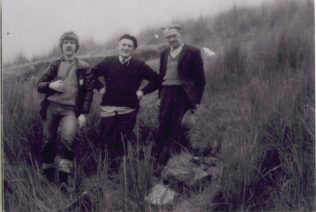 While attending a concert in Newport Parochial Hall about ten years ago I was on the verge of tears when I first heard the late Michael Lavelle’s rendition of “The Newport Volunteer”. He was singing about my father’s first cousin Jim Moran who was shot in Glenhest in the Civil War a few miles from where Mick was born and reared. He learned this song in his youth and the depth of feeling that runs through the verses certainly recalls the bitterness of those dreadful times. I knew that there was a void and a sadness surrounding his death in the whole family circle and little was ever said.

Born James Francis Moran and baptized on the 23rd of October 1898, he was the third eldest son of John Moran (weaver) Carrowsallagh, Newport and Mary Mulchrone, Doontrusk. Their respective parents were Tom Timothy Moran and Honor Heverin Tawnawoggaun, and Pat “Patch” Mulchrone and Margaret Mulchrone, Doontrusk. John and Mary married on St. Patrick’s Day 1894. James (Tom Timothy’s father) divided his farm on the east side of Carrowsallagh Rd. to his three sons. Tom Timothy Moran nearest the Newport-Mulrany railway, Big John Moran in the middle and Pat Seamus Moran near the main road to Achill. My great grand-father Michael Moran who was James’s brother farmed the west side of that by-road. Tom Timothy’s daughter Mary married her five-a-kin cousin, my grand-father Frank Moran, I am related to Jim through my grandfather and grandmother. John(weaver) and Mary inherited Tom Timothy’s farm and went on to have four other sons, Thomas, Patrick, John-Josie and Anthony besides Jim and three daughters Mary-Ellen, Greta and Norah.

It was a busy household between working the small mixed farm and the weaving activities. Weaving was strong in the family and went back to James’s time .Tragedy touched his life early when his four year old sister Greta died from burns in 1910. The same fate visited my father’s home when my aunt Bridget also died from burns at two years of age in 1893. About 1800 the Marquis of Sligo leased the Castle Quarter (Rossyvera, Carrowsallagh Derricooldrim, and Carrigahowley) from Rev. Alexander Arbutnot and he introduced flax weaving to the area. Tom Timothy was alive in 1901 Census but had died by 1911.

My dad Frank Moran jr. born in 1900 was a great pal of Jim’s and they attended Knockloughra N.S. Their teacher was a Mrs. Donovan wife of John Donovan an R.I.C sergeant, who was stationed in the Barracks beside the school. She kept the children occupied at lunchtime weeding the barrack flower-beds in summer. She was a very firm teacher but kind. Maybe the first seeds of patriotism were sown in Knockloughra. Like all children in the village Jim had to partake in farm work, milking cows gathering sheep, picking and washing potatoes and turnips to feed the pigs and going to the bog. Fortified with a bowl of stirrabout porridge and a lunch of brown bread and milk in his satchel Jim set off on his 2-mile trek to school meeting up with his cousins and friends on the way. He took a shortcut through the fields till he came to the main road. Of course on the way home he walked to Carrowsallagh bridge which was a resting place to get the ‘sums’ done before he turned into the by-road. Lucky for him my father’s home was on the brae and sometimes he would call to see his aunt Mary and would be offered boxty bread or buttermilk or my grand-father would slice a piece of turnip with his homemade slicer for him. Other times he called to his grand uncle Pat Seamus on the opposite side of the road. Jim was especially fond of his grand-uncle who used to tell him about olden times and the Fenians. Another grand-uncle ‘Big John’ lived higher up the hill and he would watch him stoking his lime kiln and watching the dust soar to the sky. Over the crest of the hill there was the village well with a tin saucepan left aside to teem the water into cans. It was very refreshing on warm sunny days. Jim had to be home to wave at the 5.30pm passenger train on its way to Westport. Jim was not recorded in the 1911 Census in Carrowsallagh, he was staying with his aunt Bridget Mulchrone (his God-mother) wife of Michael Gough an R.I.C. officer in Castlerea. He was 12 years.

Jim’s teenage years were busy ones. There was plenty of work with the Congested District Board at the time. Fences had to be made as land was been rearranged and improved. His older brothers worked at the railway and bought bicycles and Jim perfected his athletic skills running longside them on their way to Spicer’s Post Office or McNea’s shop in the neighbourhood. He used to practice sprinting in a flat field on my grand-father’s farm and won races at the local regattas. This training stood to him on the battle terrain as he was renowned for his swiftness. Kilroy’s field in Carrowsallagh was another meeting place to play football with comrades in arms his brothers Pat and Tom, Johnnie McNea, Jack Clarke, Pat Clarke, my dad and the rest of the local youth. I’m sure that more than football was discussed at times. My father was on the fringe of the activities at the time and he spent a night in the barracks in Newport for running messages for the IRA. A teacher who lodged in our house knew the R.I.C man in charge and pleaded for his release and was allowed out the next day.

The Carrowsallagh River flowed on the east side of the Moran farm. Its source was in the Ochillies Hills to the North. The river was always a source of entertainment. When the floods came down from Ochillies Mountain, rod fishing was very popular. The pools were suitable for learning to swim. The Carrowsallagh Bridge on Newport –Mulrany road was a buzz of activity on Sunday afternoons, playing pitch and toss or throwing darts in the nearby cart-shed. A long trip down the Castle Rd. would take you to Carraigahowley and Roigh where the rich and famous had their residences.

Jim was a member of the Tiernaur Coy. of the IRA I do not have a record of when or where he joined – probably 1917. His neighbour Jack Connolly who was four years older than Jim had joined the volunteers in Tiernaur 1914. Jack was working on the railway in Roscommon when he joined the IRA in Knockcroghery in 1917. There were approx. 70 IRA members in the Tiernaur coy. when the truce was declared in 1921. The coy included his two older brothers Patrick and Tom. His uncle Tom Mulchrone Doontrusk and his two first cousins John and Pat Mulchrone Deradda. His sister Mary Ellen and his first cousins Maggie and Ellen Moran were also members of the Tiernaur Coy of Cumann na mBan. A Tiernaur Banner was commissioned with Padraic Pearse on one side and St. Patrick on the other side (Faith and Fatherland). Three plays “Rory O Moore”, “The Workhouse Ward” and “The Dawn of Freedom” were rehearsed in my father’s house complete with curtains and all. Pat Clarke directed the plays and Jim was assisting as well. This helped to pay for the Banner which was bought in 1917. The Coy marched to the Reek against Conscription. The banner was carried in several marches and demonstrations, the banner is still treasured in the Tiernaur area. Jim was one of six members of the Tiernaur IRA coy. selected by Michael Kilroy for the West Mayo Flying Column; in March 1921. He is the young lad with the wavy hair and the dickie bow in the front row of Leonard’s famous photo of the flying column. He fought in the War of Independence; and in the Civil War on the republican side. His military adventures and death are well documented by General Michael Kilroy in his Statement to the Bureau of Military History; Willie Sammon’s “War of Independence and Civil War”-Back the Road, Vol 1 No. 2;  Jim O’Donnell’s Article-“Diary of an Irish Volunteer” and Jim’s brother Anthony’s Essay-“The Night the Tans Came” Those two latter articles are published in Cathair na Mart Journal. His brother Tony said when the raid was over Jim ran across the fields to warn his comrade Jack Connolly that the tans were raiding.. His Faith was strong as shown in Jim O’Donnell’s diary as the last job he did at night no matter how weary, was to kneel and say the Rosary. He was also seen praying just before he crept up to ask Joe Baker what they should do on that fateful day.

A few days before his death he visited Pat Seamus his granduncle; and helped him to cut an ash tree for fire-wood. He said more than once that he would never be captured alive and so be it….it was prophetic. He died on Wednesday the 7th of March 1923 in his 24th year in Glenhest. When his coffin was brought into Newport they opened it for his mother. She mopped his brow with her handkerchief and kept it till the day she died. She also asked to talk to the young soldier who shot him so she could forgive him. She was proud of her family’s stand for freedom and was often heard singing “The Tricoloured Ribbon O” while spinning and weaving.

His Requiem Mass took place in St. Patrick’s Parish Church in Newport (Mayo News on 24th March 1923) “His funeral to the family burial ground in historic Burrishoole was an impressive one. The coffin draped in the Tri-colour was borne on the shoulders of the young men of the district. Considering the disturbing -times a surprisingly large number of young men marched to the graveside, followed by a large number of ladies carrying wreaths with ‘Our Little Hero’ written on them. Several Rosaries were recited on the way.” He was buried in the grave with his grandparents Tom Timothy Moran, and Honor Heverin looking out on the Burrishoole river. Trocaire De orthu go leir. Neither the members of the family or the Priest who officiated were named in the Mayo News article, a sign of the troubled times.

Even though this family sacrificed much in the fight for freedom three of the siblings immigrated; Thomas and Patrick to England and Mary Ellen to the U.S.A. John Josie and Norah married locally and Anthony had a business in Dublin. All six got married and raised families. John Josie trained as a weaver and continued the trade until demand for the material declined in the 1930’s. Jim’s father John died in 1939 and his mother the following year. They are buried with their daughter Greta close to the Abbey. Jims father John was born into a family of seven and they all died in America except my grand-mother and himself. His mother Mary on the other hand was one of ten children six of whom married locally, including one of her sisters who married an R.I.C. Officer. Most of the men who took part in the war of independence and civil war were born in the decade 1892-1902. They spent the best years of their lives involved in the campaign, and made huge sacrifices. By the end of 1925 many of those involved on both the Free State and the republican side had emigrated, to the US or to England. They left behind a country which because of their efforts had self-rule but could not give them a living. It is little wonder many were disillusioned, some never returned.

I acknowledge the help of my relatives.The most senior member being Dominick O’Grady, Pat Seamus’s grand-son; Mary Jo Jordan, Patsy Jordan and other nieces and nephews of Jim Moran.