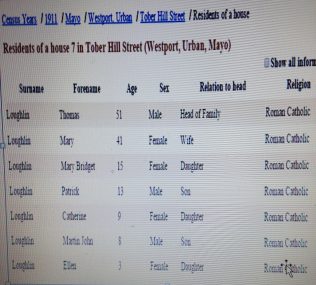 zoom
Martin John, aged 8 in the 1911 Census with his family on Tober Hill Westport
www.nationalarchives.ie 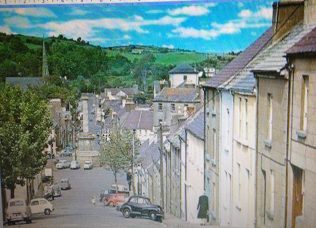 zoom
View of the Monument at the Octogan, Westport, from Tubber Hill, where Martin John was born. He later moved down lower to Peter Street, you can see his Hackney Cab in this photograph.
photograph from ebay.ie 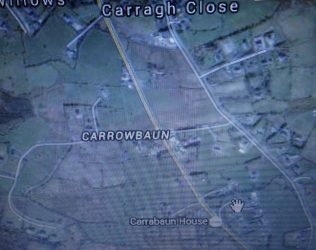 zoom
Carrowbaun, Martin John loved to farm on the land at Carrowbaun that his mother purchased
https://www.irelands-directory.com 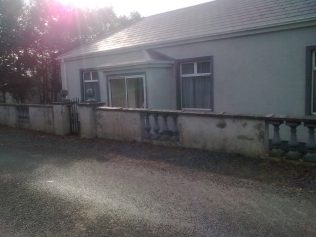 zoom
Gretta McGreal's Cottage in Carrabaun, Martin John visited Gretta when he took his cattle to graze. He was enjoying her company one day when he took ill, it is in this house that Martin John sadly passed away in the care of his loved ones.
Noelene Beckett Crowe, Personal Collection 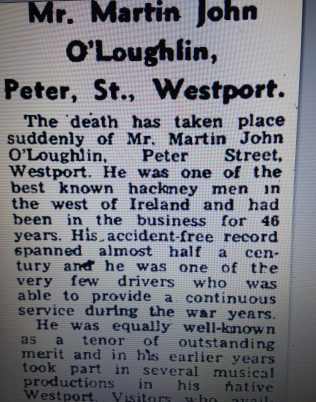 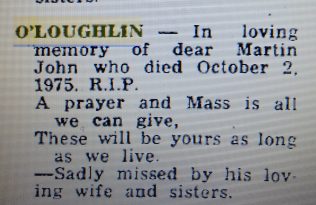 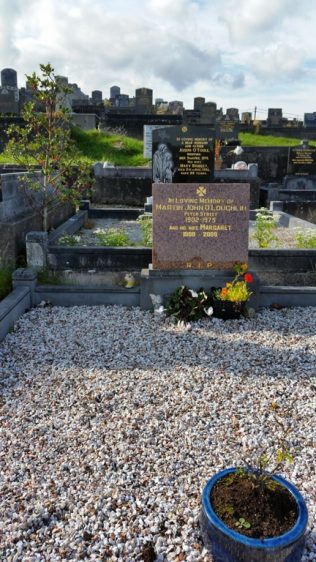 My uncle Martin John was many things in his life. His main occupation was as a hackney (taxi) driver. His father was a master tailor, Tom O’ Loughlin, who married a lady called Mary Heverin from Killeenacoff. They had five children, two boys and three girls. Their first home was on Tubber Hill in a small house. Martin John was the youngest boy. His brother Paddy became the Mayo CEO in the Vocational Education system. My mother was Maisie who married Willie Lyons from High Street. Martin John’s mother was an astute business woman. As the house on Tubber Hill was too small for five children, a tailoring business and a small shop, she bought two properties on Peter Street and let them into one. Business flourished so she bought three more houses on Tubber Hill and let them out to rent. Her next purchase was two fields in Carrabaun. So Martin John became a small farmer as he kept cows in the Carrabaun fields. He loved his cows and particularly his calves. He wanted to buy a lorry but his mother said no as he would be in working clothes all his life. So she bought him a beautiful Ford Essex for a taxi business. It was the perfect decision as he loved the company of people and he was blessed with a glorious tenor voice and a prefect ear for music.

He got the car in 1928 and his was the only car for hire on Peter Street. His passengers knew of his talent so he had to sing and drive for them! Radio was becoming popular and particularly John McCormack. Martin John was, as many claimed, McCormack’s equal. John McCormack had the benefit of professional training. Martin John loved his cows and his hackney business so he showed no interest in voice tuition. It was a pity we all say or maybe not.

Running Out of Tyres

In 1939 World War 2 started. Petrol was rationed, my uncle got his ration. The only cars in Westport belonged to the priest and the doctor and Martin John. His business boomed and tyres were impossible to buy. As time went on liners came into Cobh in Cork. He got many runs to collect Americans coming home and vice versa. Of course he had to sing his way from Cork! The songs at the time were very emotional and there was many a tear shed on the journeys.

He was running out of tyres, but he knew a bank manager who had his car on blocks during the remainder of the war so he bought his tyres. Sometime later the airport at Rinanna, now called Shannon, opened and had transatlantic flights. For Martin John it meant more Americans and more singing,  From the early ’40s I spent a lot of time with Martin John. At this stage he had a beautiful Ford V8 Deluxe. On the rear of the car he had a fold out steel platform to carry the large trunks from the USA, or the bicycle for the passenger who cycled in to shop and taxi home to the country. I was on many of these trips.

To get back to his great voice, he had joined St. Mary’s Choir in Westport. Gabriel Kelly was organist and choir master. Gabriel and I arranged a session after the church closed and we recorded many of his well known hymns and songs on a little tape cassette. My aunt Lena O’Loughlin worked in Dublin for many years. She brought the tape into the Eamon Andrew Studios to have it put onto a 78rpm vinyl Lp record. The management in the studio wanted to meet him for an interview but Martin John would not leave his cows and his faithful customers.

I remember one night he was driving home a poor old lady with her shopping. There was a very narrow boreen up to her house. He helped her in to the kitchen with her shopping. In two minutes he was in and out to the turf shed and brought in a supply of turf and had a lovely blazing fire going in quick time. That was the kind of man he was.

On another occasion, he was called to the same house to bring her husband to hospital. As no ambulance could get up to the house, Martin John got a wheelbarrow from the shed and placed the patient gently into it and wheeled him to the car, where he put him in the front seat. Martin John was physically very strong.

He was in great demand for weddings. His car was always spotless for the bride. He would also sing during the ceremony. His Panis on Gelicus, Just for Today and Gunod’s Ave Maria were beautiful. He never used a microphone and he could deliver perfect notes to any corner of the church without strain or shouting.

Martin John was always delighted if I was the photographer at the same wedding. He sang at many concerts in the dance hall/cinema on James Street. The Ideal Cinema could convert to a concert hall when required.

One night when I was coming home from my studio on Bridge Street, I went up Peter Street and dropped in to see Martin John and his wife Margaret. He was about to walk up Tubber Hill with his milk cans to his field in Carrabaun, where his cows were ready for milking. I said ‘Sit in and I will drop you off at the Leenane Road bridge’. I was hurrying home to Rosbeg. Peter Heverin, his first cousin was on the bridge and the last memory I have of Martin John is he and Peter Heverin leaning on the bridge wall and the two of them looking out at the Reek and talking to each other. I went home to Rosbeg and had just started my dinner when the phone rang. It was Johnny Molloy. He said can you come up to Gretta McGreal’s house as Martin John is not well. I was there in minutes. Gretta was one side of the fire and Martin John had just died sitting the other side while talking to Gretta. A short time later Dr. Bert Farrell came but nothing could be done he was gone from this world and his beautiful voice was silenced forever. Thank God we had the records.

We built a new house on the land where he milked his cows for the last time.

I have lovely memories of walking up Peter Street and Tubber Hill with Martin John, at a very leisurely pace with his two cows on our way to his fields in Carrabaun. At that time cars were few and far between. Most of the houses on Tubber Hill had half doors, or the full doors would be left wide open. The man or woman of the house would see the cows just ahead of us so there was always a greeting and a chat. The cows were used to this so they would stop. The small black cow would stop and press her side against Martin John and he would place his arm across her back. The large red cow would look back now and again and give a short lew. She was anxious to get to the fresh green grass in Carrabaun.

Martin John died at the age of 73. He never drank or smoked. Up to his untimely death his voice was as good as ever. I had the unenviable job of going back to Peter Street with Dr. Farrell to tell his wife Margaret the terrible news. She insisted on coming up with me to Gretta’s to see him while he was still warm. When she went in she immediately hugged him and kissed him. I had to make several appeals to ask people to leave us to our private moments.

Years later we had an authority on the voice of tenor, John McCormack at one of our Westport Arts Meetings, and he said that Martin John’s voice was equal to best.