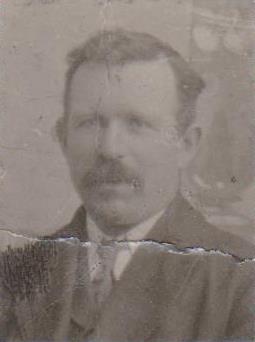 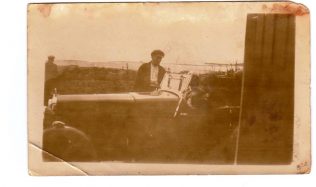 zoom
Thomas Moran pictured at Mulranny with his motor car 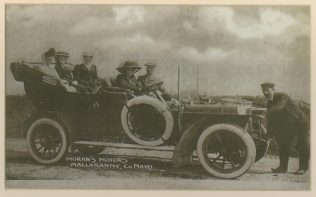 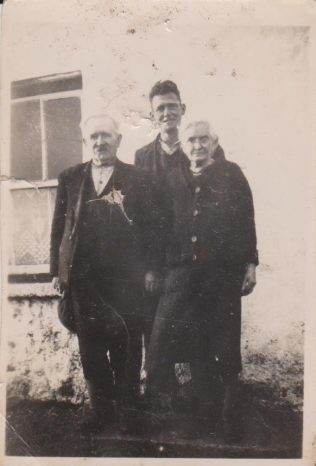 ‘Engine, Engine Number 9, pumping water all the time’, may not be the exact lyrics of Roger Miller’s song, but it is recited regularly in our house if Number 9 is mentioned in conversation. Thomas Moran, also known as Number 9, famous for his building of the armoured car ‘Queen of the West’ was a grand-uncle of my fathers. The eldest of 10, he was born in Shraloggy, Newport on 20th November 1872.

Thomas Moran was the eldest son of Patrick Moran, Shraloggy, and Mary ‘Smith’ Moran, Roskeen. Patrick’s parents were James Moran, Carrowsallagh and Mary (unknown, possibly Hoban). Mary ‘Smith’ Moran came from a family of blacksmiths and her parents were John Moran (possibly of Ballycroy/Bangor) and Mary McLoughlin of Roskeen. Patrick (also known as Pat Jimmy) and Mary married about 1870 in Newport Church, Co. Mayo. They had 9 children in total, the others christened Michael, John, Patrick, Maria, James, Paul, Catherine and Annie. Patrick Moran (brother of Number 9), who had emigrated to Scotland, was father of Anne Doherty, my grandmother.

Reared at Shraloggy in Carrowsallagh, and a pupil of Derrada N.S., Number moved to Claremorris where he worked on the railway lines. From there he went to Glasgow and came in contact with McAlpines, a family of building contractors. Even though blacksmithing was in his blood, it is thought that Number learned his trade here and became experienced in all things steel and metal related.

Following on from his time in Glasgow, Number was sent to work as a mechanical engineer for McAlpines on the Barrow Bridge, linking the counties of Kilkenny and Wexford. It was built between the years of 1902 and 1906 and when opened, was the longest railway bridge in Ireland at 2,131 feet.

It was here in Co. Wexford as a lodger of the Connolly household, that Number met Margaret Connolly, his wife. A member of Cumann na mBan and from Campile, they married on 6th May 1907 in the Roman Catholic Chapel of Ballinamona.

Number returned to Mayo and purchased the premises where Doherty’s shop/bar currently stands from Robert Vesey Stoney on 14th October 1920. Up until that point the premises was rented by the Berry brothers from Stoney for which it was a grain store and stables for Daly’s Hotel next door (now Cowleys).The sum of buildings and land purchased from Stoney (approx. 16 acres) came to £300. Here Number ran a shop, licensed premises and garage, and was the first villager to own a motor car. People came from far and wide to Mulranny to have their cars fixed. An enterprising man, Number cultivated sally rods in the land surrounding the premises which were sold mainly to people from Achill for cleaving.

Number kept bees, a few cattle and tended a vegetable garden, where Sean, my father’s house now stands. He co-owned a boat with James Grehan, Cushlecka, also known locally as the ‘Miner’, Annie Grealis’ father. Number was also a notorious draughts player, attracting other players from long distances to Mulranny to play.

Maggie, his wife, was a keen cook. It is said Number once bought her a cook book and she later became renowned locally for her Christmas pudding. Her nephew, Thomas Doherty, was sent to Mulranny in 1924 after his own mother died young. He was reared in Mulranny by Number and Maggie.

Number became involved in the Civil War, and was an Intelligence Officer for the Republican Army. It was during this time that he became famous for the building of the ‘Queen of the West’ armoured car. A boiler from the Great Southern Hotel in Mulranny was fitted to the body of an ordinary motor car provided with a Crossley lorry engine. The boiler was fitted with double armoured plating, between which was placed a cement body. This was bored so as to allow rifles to go through. Jim Moran, ‘The Newport Volunteer’ and a cousin of Numbers, assisted in the building of the Queen.

The Queen of the West was involved in the capture of Clifden in October 1922 but here she fell into the hands of the Free State troops. Unfortunately, it is not known what became of the famous armoured car.

After the civil war, Number attempted and failed to claim from the Irish state £1,156 in damages caused to his home, shop, garage and licensed premises. The Free State troops arrested him, put a revolver to his staff members face, broke up everything in his premises and fired their rifles through the roof and windows. They knocked walls in the yard, three motor cars and a lorry were smashed, gallons of oil and varnish were spilled and his premises looted.

Number passed away on 9th June 1949 aged 75 years. An obituary printed in the Mayo News in July of that year described Number as ‘a kind, helpful neighbour, a pleasant and clean-spoken companion, and a genuine Irishman who did not stop to count the cost when a blow had to be struck for the freedom of his country’. Number is buried alongside his parents at Burrishoole Abbey, close to the shore, although a headstone has been erected in Mulranny Cemetery in his memory. To this day, Doherty’s in Mulranny still bears the number ‘9’ over its front door.