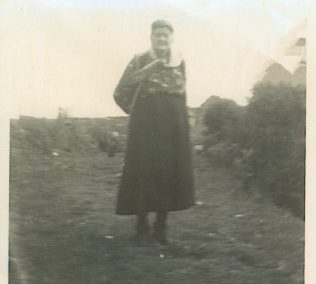 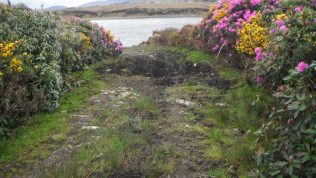 zoom
The road to Ferry on the Ballycroy side
Fintan Masterson 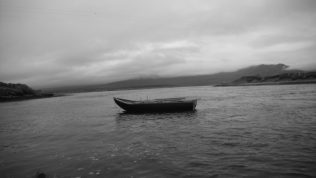 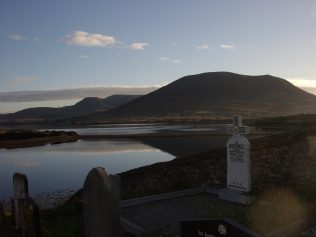 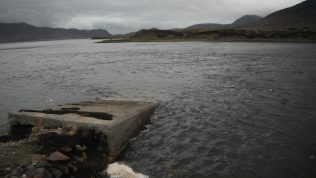 zoom
Plaque on the Greenway in Tonragee
Fintan Masterson

My great grandmother Peggy Lynchehaun was known as the ferry woman. Peggy operated a ferry service across the narrow channel between Tonragee in Achill and Ballycroy for around forty years. It was unusual for a woman in those days to have such a business. The boat used was a punt, an open timber craft.

Peggy was born about 1874 and she married her neighbour Martin Lynchehaun when she was 18. Martin like most Achill men at that time spent most of the year in Scotland. Peggy’s home was always called Lynchehaun’s place. Mary Ann McGinty her granddaughter says “it was always Lynchehaun’s place.” Peggy had five children Michael, Sabina, Mary, Bridget and Thomas. Michael passed away from flu in 1918, Mary married a Cooney and Sabina was married to a McGinty. Bridget married Michael Masterson. Thomas was married to Annie McGinty.

The Ferry was at the end of the “Fish Road”. The Fish road was constructed to connect with the railway for the export of fish from Ballycroy. Beaumont (2002: 57). The boat was moored at the bottom of the Fish Road opposite Oileán Fraoigh. The people who used the ferry were mainly the doctor and the priest. A white sheet would be placed flat on the Ballycroy side and this would be a sign for Peggy to pick up somebody on that side of the channel.

Peggy also ran a funeral service at that time. Claggan Cemetery was the burying ground for Tonragee East and Owenduff. It was the tradition to make the journey by sea, rather than the long trip by land to Cloughmore Cemetery on Achill Island ten miles away. Martin McGinty states that his mother Sabina Lynchehaun a daughter of Peggy, used to help her mother with the ferry. Martin says the ferry was very busy on fair days in Achill Sound. Sheep and Cattle were ferried across between Ballycroy and Tonragee.

Mary Ann McGinty goes on to say “Peggy was like a nurse in the village but without any training”. She delivered the babies and prepared the corpse for the funerals. Peggy told Mary Ann a story about how a fox had taken all Peggy’s hens one night. The income from the hen’s eggs was very important to women in rural Ireland at that time. Peggy was so upset about this event that she cried. The following day different neighbour’s came to Peggy’s house, each with one hen and all the hens she lost to the fox were replaced. This kind act by the neighbour’s demonstrated the generosity and wonderful community spirit of that period. It also demonstrated the high regard Peggy’s neighbour’s had for her.

Peggy Lynchehaun was an unusual woman, to operate a ferry at the turn of the 20th century. This was a heavy job for a woman in those times without an outboard engine. I am a proud descendant of Peggy Lynchehaun. She demonstrated a strong spirit in what was at that time a male dominated world. She provided a ferry service for people across the channel which was only about 100 yards wide but it was eight miles around by road. This proves that there was always a tradition with seafarers and travel in the West of Ireland. Mayo co. council have recently erected a plaque to help remember the service she provided.

She died on the 18th of February 1960 at 86 years of age. When the cemetery was opened in Achill Sound, the Tonragee and Owenduff people were buried there and the demand for the funeral ferry died out. Peggy herself is buried in Achill Sound cemetery.