The Lynches of Mayo 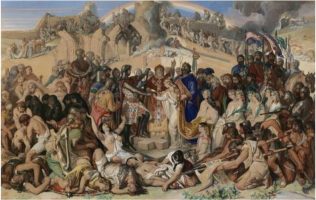 zoom
The Marriage of Strongbow and Aoife, Waterford 1170, following the Anglo-Norman invasion of Ireland in 1169.
https://en.wikipedia.org/wiki/Aoife_MacMurrough; https://www.askaboutireland.ie/reading-room/artsliterature/art-artists/daniel-maclise-(1806-1870/the-marriage-of-strongbow/.

Progression of the Anglo-Norman Lynches in Mayo

The invasion of Ireland by Strongbow in 1169 was a seminal moment in Irish history. It resulted in a significant settlement of Anglo-Normans in Ireland that has endured to the present day. That settlement included descendants of the de Lench invaders whose surname was later anglicized to Lynch. Some of those Lynches established themselves in Galway City as its most powerful tribe. The appointment of Thomas Lynch as Provost of Galway in 1274, and his subsequent marriage to Bridget Marshal in 1280, underpinned the continuing progress of the Lynch Tribe of Galway.

Further success followed when James I appointed Henry Lynch, a wealthy merchant, to a
baronetcy in 1622. Buoyed by their continuing progress in Galway, the 2nd Baronet, Robert
Lynch participated in the Rebellion of 1641. He sought to force concessions to Irish Catholics
under pressure from Protestant England. In the following decade, the Cromwellians seized
Galway city in 1652 and expelled the baronetical Lynches who either settled in rural Galway
or moved north into Mayo. Henry Lynch, 3rd Bt, who settled on the shore of Lough Carra, Co
Mayo, continued the struggle for Irish rights by supporting James II, the last Catholic monarch of England. Following the Jacobite defeat by William of Orange at the Battle of the Boyne in 1690, the 3rd baronet was attainted of treason and fled to France, never to return to Ireland.