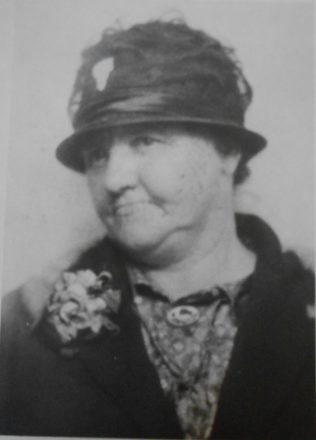 Mary Stanton was born January 6,1880 in Clookeen, Kilmeena, Westport, County Mayo. She was the daughter of Thomas Johannas Staunton and Catherine Scahill of Carrowholly.  Mary would of attended the Carrowholly National School.

In 1895 Mary left Ireland aboard the ship S.S. Catalonia for America.  She arrived at Ellis Island, New York City, New York.  On the voyage over, Mary played her sqeeze box to entertain the passengers.  At Ellis Island there is a plaque with her name on it, and her at Ellis Island was where the spelling of her last name got changed from Staunton to Stanton. Arriving in New York City, Mary continued on to Brookline , Massachusetts.

Mary came to Brookline to meet up with Michael Conway, who was already living in Pearl Street, Brookine ,Mass with Mr Fadden.  Mary knew Michael from Westport.  Michael was from Loughloon (Lagloon) Westport,and had arrived in New York in 1893 aboard the ship S.S. Etruria.  Michael had found work for the town of Brookline, Parks Department, digging ditches and working on the new roads.

To find work, Mary knocked on doors of houses for weeks asking could she do the laundry or cook the meals. Mary was and excellent cook.  She finally go hired as a cook by the Head of the Atlantic and Pacific Tea Company (A&P).  It was the largest Supermarket chain across America at this time.

Mary and Michael married on September 26,1900 in St. Mary’s Catholic Church, Brookline, Mass.  They lived for a few years at Pearl St then moved to 18 Aspinwall Ave, this was a duplex and Mary took in boarders.  One of the boarders during Prohibition was a Rum Runner.   Mary and Michael had 11 children, 7 which lived to adults.   In her kitchen, Mary had 2 cast iron stoves for her cooking and baking.  Every Christmas her Boss would send her the largest turkey he could find with all the fixings from breads, fruits, and vegetables, etc for a family of 11.

All of the bills were in Mary’s name, even the mortgage.  She bought the first family car for her son Thomas to drive.  she paid $300 for it.   Mary bought a burial plot that buried 15 people.

Mary Stanton Conway had 18 Grandchildren.  She died in a Nursing Home on March 30,1963 of Cerebral Hemorrhage and Congestive Heart Failure.