"Father of the American Band"

When Irish eyes were smiling …. 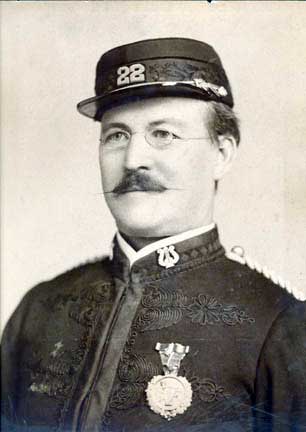 Irish Eyes were not smiling too much in the 1800s in Galway or indeed anywhere in Ireland when Famine ravaged the land and the people . But  from this monstrous  disaster arose many ,many positives , some of which are still to be unearthed  by historians and Universities.

An infant in Ballygar

One such story is that of Galwayman , Patrick S Gilmore . Gilmore was born outside Dublin in 1829 but reared from an infant in Ballygar , in the north of the County . Happily he lived there and was educated in the local Trihill School . Playing Fife and Drum he developed a love for Music and its value to the people . Later on he  studied it in detail in Athlone , Co Westmeath .

Please note – the word “band”  is used here as Gilmore himself used it . However please understand that to our ears his band was indeed an orchestra and bears little or no relationship to the bands of today . The average size of his Band was 55 pieces up to 100 members by his death in 1892 . Each member was required to know between 1500 and 2000 pieces by heart for his instrument . Gilmores personal Music Library was the largest of the day totalling between 11000 and 14000 separate scores of music . 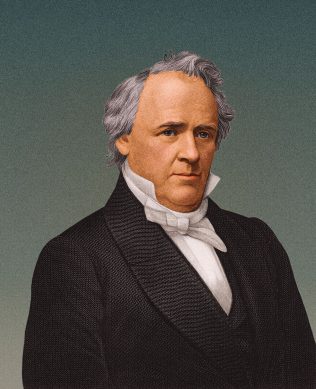 As a 19 yr old he emigrated with 1 million others escaping the Great Famine  in 1849 . Arriving  in Massachusetts     he conducted  bands in Salem , and Boston and developed his craft further as an innovative  Conductor  and Band Leader.  Whilst in Boston he developed the initial  4 th July Celebrations  and the Boston Promenade Concerts , and was invited to lead  the inauguration parade of President Buchanan in Washington DC in 1857 { the first of 8 presidential inaugurations he participated in }.

In 1860 Gilmore’s Band  played to  both the Democratic  and the Republican National Conventions  { Pres. Lincoln was selected at the latter convention} .  And at the outset of Civil War , both he and his Band , volunteered  en masse for service with the 24 th  Infantry  Regiment Mass, and set sail with General Burnside on the famous Burnside Expedition to the Carolinas in early 1862.

He  saw battle  in Roanoke, New Bern, and Tranters Creek, and is  recorded as playing music for his Union colleagues but also entertaining  the Confederate Prisoners and acting as stretcher bearers on the battlefield for the  injured. In 1863 he composed a song that still lasts the test of time as a ballad which mentions neither victor nor vanquished , cause or result , ie . “When Johnny comes Marching Home “. 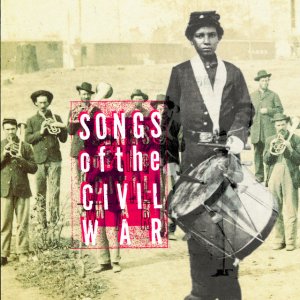 He was inducted into the American Songwriters Hall of Fame in 1970 for this composition . He wrote the song using the pseudonym “Louis Lambert “.

PS Gilmore organised 4 great “Gilmorean Concerts Jubilees”. “Gilmorean” was a word created by the great newspaper “Harpers Weekly”  to describe his massive  concerts which have no compare .

He  moved to NYC in 1873 and set about building a band that would surpass all offered in Europe , and for the next  5 years , rehearsals increased , the repertoire was broadened , and the Gilmore Band library of music was increased to over 11,000 separate scores .  Performances include touring , expositions and parades increased ,   and throughout the country , Gilmores popularity intensified .
In 1878 he arranged for his  band to tour Europe , including  Ireland , UK , Holland ,Belgium , France , Germany and over 151 concerts they were judged by all to be the greatest band ever heard at this time in the world . They played for 1 month in the UK  alone to 65 concerts from Bristol to Aberdeen to crowds of in excess of 250,000 people.

Queen Victoria invited them to play in Balmoral Castle

The King of Holland , and the Kaiser Franz attended the concerts. Even Queen Victoria invited them to play in Balmoral  Castle , but Gilmore declined as he would be late for the 4 th of July celebrations in the Paris Exposition at the Trocadero  . He was delighted at the success of his “Gilmores American Band” tour of Europe and the acclamation by the Germans that “Gilmores American Band” was now the greatest Musical organisation in the world. As a result of this tour,  America was now elevated as a centre of serious cultural performance  thanks to Gilmore .
Returning home he concentrated on developing his band organisation further .   He  assumed the lease for the Hippodrome in NYC which became  Gilmore Gardens and later on in 1880, Madison Square Gardens . Gilmores record still stands of playing to more than  150 consecutive concerts to crowds of 10,000 or more in the Gardens .  He was also the musical director at National Events such as the American National  Centennial Celebrations in 1876 in Philadelphia and again in 1886 for the inauguration ceremony for the Statue of Liberty. 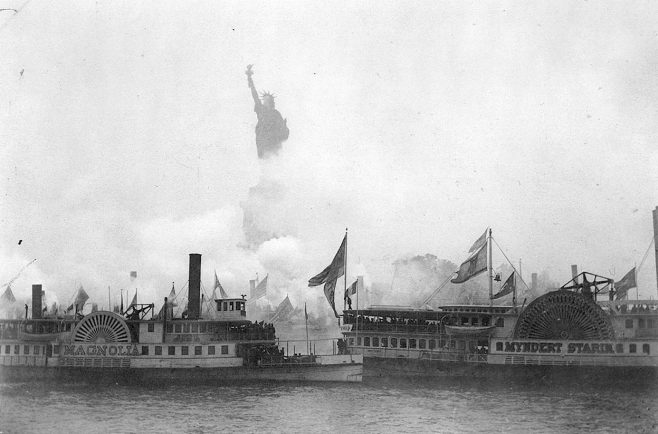 He was Americas first Superstar in the modern sense .  Expositions in Kansas and St Louis would not open without having Gilmores band booked  for the event , and  when  Texas opened their new state Capital Building it was Gilmore who was the Musical Director .  And so Patrick Sarsfield Gilmore was by far the best known Irishman of the 19 th Century in America . In 1889 alone , Gilmores Band on tour  were seen by crowds in excess of 1 million nationwide with crowds of 12,000 per night in  Austin , or 6 nights in San Francisco before 5000 per night , or indeed 10000 per night in New Orleans.

Gilmore returned to Ireland on a number of occasions however he never visited Ballygar again . However he knew more about Ballygar , Galway and the island of Ireland probably more than the locals in Ireland of the time . This was due to his long term friendship with Galway man Patrick Ford  { editor in chief of the Irish World Newspaper in NYC } . This newspaper circulation continued till the 1970s and indeed at one point it exceeded the figures of the present day NY Times paper . But this is another story yet to be uncovered and researched.

He was an Irishman

Never did he  forget Ireland , his heritage or his  fellow Irish  . He was acclaimed positively as an Irishman in American newspaper articles throughout his career . When C S Parnell and Michael Davitt and their organisations needed to promote their policies it was to Gilmore that they turned not only for  monetary support but more importantly for  public endorsement .  Gilmore included references to Home Rule in his Concert Programs and even wrote a Ballad dedicated to Home Rule called “Ireland to England “. He raised money for Famine Relief , Clan na nGael , the Annual Emerald Ball for Orphans , the Friendly Sons of St Patrick  etc . Gilmore spoke on the value of the “Boycott” to the Irish People and declared publicly and proudly that “he was an Irishman“.

In 1880 Gilmore played at the wonderful concert  in Madison Square Gardens held specifically to hear Charles Stewart Parnell speak on the issue of Home Rule and to raise money for the work  in Ireland . A follow up event in Brooklyn Acadamy of Music which was spoken to by the Rev Henry Ward Beecher and Charles Stewart Parnell  had a profound effect on Gilmore . 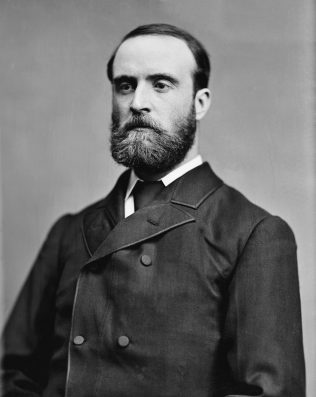 In March 17 1880 , when the parade was probably in full swing in NYC , Gilmore had organised a series of Morning , Afternoon and evening concerts in Madison Square Gardens in aid of the “Irish Relief Fund “. Performances that day included a choir of 600 plus the 2 greatest Cornet players to ever play the stage in any era , Matthew Arbuckle and Jules Levy. For the Patrick day celebration , however Gilmore was normally on tour in the South but is also recorded as participating in the Sto Louis Parades on occasion .

In Dec 1885 whilst Parnell and his MPs were fighting a by-election in north Galway , Gilmore was asked by the Parnell Parlimentary Party of Ireland to help publicise the cause and raise some funds . By Feb 14 1886 Gilmore had taken Madison Square Gardens , and was ready to play 2 concerts on that Valentines day for the cause . The next day Gilmore went to the meeting of the Parnell Party Fund in Hoffmans House , NYC , where Eugene Kelly was chairing the meeting , and to thunderous cheers and applause Gilmore placed a cheque on the table for $6000 . More importantly for the cause , Gilmores endorsement as  the First American Superstar of the day was vital to fundraising throughout the country.

In 1889 he wrote a piece of music not known of today by many but in 1889 it was so popular . Because it was printed in the New York Herald for free distribution to all in that newspaper . Called “Ireland to England” it outlines the story of Home Rule and how all things will evolve once the English give us Home Rule  . Never afraid of adverse opinion  , he launched it the day before the inauguration ceremony was held to celebrate the Community Hall in the St Francis Xavier College in Lr Manhattan . The oration that day was given by his good friend , ex congressman William Bourke Cockran  {originally from Sligo }
It should also be noted that P. S. Gilmore raised the profile of  Irish Music and Culture more  than most before or since . He continuously played and featured  the works of Thomas Moore and in fact organised the memorial ceremony to Moore . In addition the works of Michael William Balfe and William Vincent Wallace both Irish composers of extra ordinary capabilities were heard throughout America including Manhattan Beach and the “Gardens”. Whilst being interviewed by Patrick Ford of the Irish World Paper in 1887, and espousing the characteristics of Irish Music with the Ossians and Columbkilles he said  about the then Irish flag “ that others belong to the nations that exalt the dragon , the reptile , the vulture , however my nation alone has the harp “the soul of music “ emblassioned on its Emerald flag.

Later on in the early 1900’s a young Tenor sang in the Music Hall of the St Louis Exposition oblivious to the fact that Gilmore had 3 years earlier brought 750,000 extra attendees to the great exposition . However this Tenors teacher knew about him . In 1906 , Michael Kilkelly the teacher of Count John McCormack wrote in the Westmeath papers about the Great Gilmore and his career . Gilmore had opened up the doors previously shut in the faces of  the Irish . Those such as McCormack , Victor Herbert , George M Cohen and many others could now benefit .
In 1891 , Gilmore approached NYC Hall  , for a permit to welcome in the New Year from the steps of City Hall , and celebrate the 400 th   Anniversary of Columbus arrival in America.  This became the first official public New Years celebration  in NYC a tradition started by P S  Gilmore .
When he died ,an estimated  500,000 lined 5 th Ave in NY for his funeral  to  St Francis Xavier Church in Manhattan . John Philip Sousa named Gilmore the “Father of the American Band “ , and said years later that  if anyone “ who could do one thousandth as much good  for mankind as was done by Patrick Sarsfield Gilmore ,  his memory will indeed be blessed “ . Gilmore is buried in Cavalry Cemetery ,  Woodside , Queens . Patrick S Gilmore is today unknown worldwide .  There is but a Street in St Louis and a Plaque in Ballygar, Co Galway to celebrate his name. 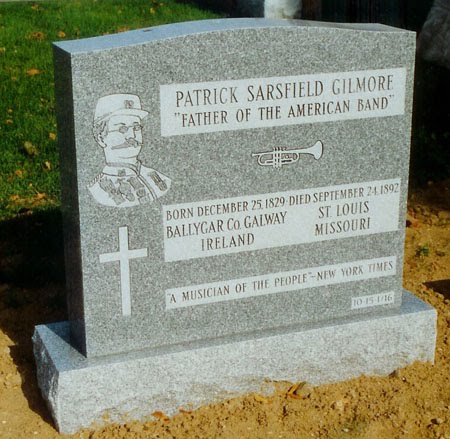 With Gilmore’s passing , festivals were created throughout the country to celebrate his music and performances . Seperate committees collected huge funds in cities such as Chicago , St Louis and New York . Unfortunately Mrs Gilmore would not allow her husband’s name to be celebrated and so no statue was ever erected