Irishman in British Army in WW2 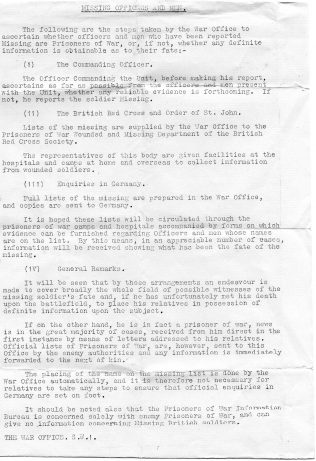 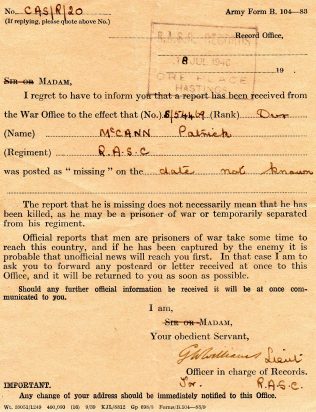 My father, Patrick Desmond McCann, was an officer in the British Army during the second world war.  He joined the regular army after graduating in Dublin in the late 1930s, by going to Belfast.  His mother wanted him to become a teacher, but he was very anti-fascist and was aware that war was likely and wanted to join the army.  He was transferred to Sandhurst and became an officer.  In 1940 my grandmother received a letter from the War Office that he was “missing” after Dunkirk.  My grandmother was instructed (photo attached) that should she receive any communication from him from a prisoner of war camp, she should forward it to the War Office as soon as possible.  She received information about the steps taken by the War Office to ascertain what happened to missing officers which would inform them of the fate of the missing (photo attached)

My Granny organised several masses for my Dad and the family, living in Phibsborough, were devastated by what was presumed to be his death.  However, some six weeks later, he turned up on the doorstep, having alighted from the Irish Mail in Dun Laoghaire, and terrified the living daylights out of his younger sisters, who assumed that it was a ghost!

He organised with some of his friends to go to Mooney’s pub in O’Connell Street and was aghast to discover that (it being the weekend), there were German soldiers in the pub in full uniform who were on leave from the Curragh Camp!