You are here: HomenextExplore our archivenextPeoplenextA miscellany of peoplenextRichard Burke and the 'irregular' foundation of Burrishoole friary, Co. Mayo 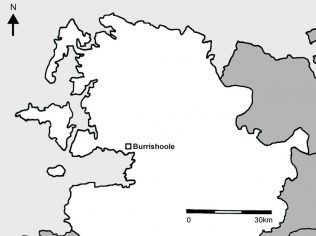 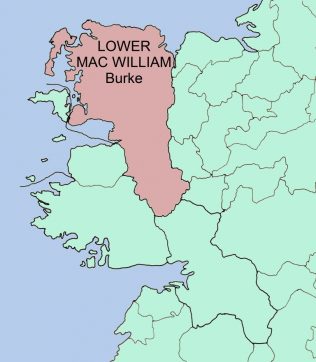 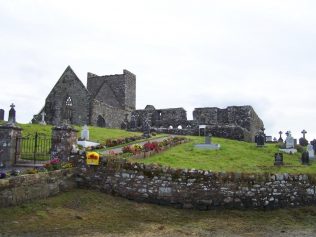 zoom
Burrishoole friary, east window of the choir is to the left, cloister to the right of the image 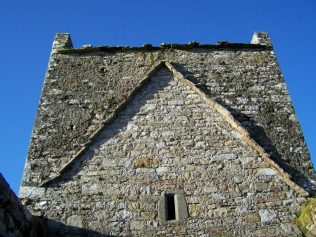 zoom
Crossing tower, Burrishoole friary. It is broad and short and echoes the style of tower constructed by the Cistercians in Ireland 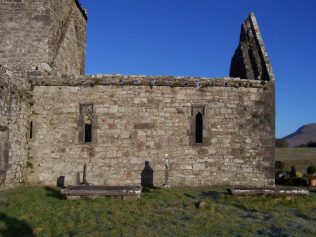 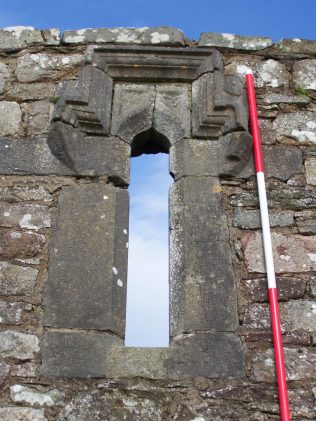 St Mary’s Dominican friary, Burrishoole, Co, Mayo was founded c. 1469 by Richard Burke of Turlough, Mac William Íochtair (chief of the Lower Mac William Burkes).  In his hasty efforts to establish a friary to which he could retire, Richard risked incurring the wrath of the Church and possible excommunication of himself and the Dominican friars who assisted him in establishing the friary.

Richard granted land for the construction of Burrishoole friary and the Dominicans subsequently took possession of this land, with the permission of the Archbishop of Tuam.  The friars then turned their attention to the building of temporary living quarters and began to cultivate land to support themselves.  Whilst a stone edifice would ultimately be constructed at the site, at this early stage it is likely that the structures were of little more than wooden construction.  Indeed it is worth remembering that the use of wood in late medieval structures in Ireland is typically overlooked due to its poor survival rates.

The friars of Burrishoole had begun to celebrate masses and the Divine Office.  However, in their haste to establish the friary, they had created an ‘irregular foundation’, one founded without the requisite papal permission.  The penalty for such an offense could be excommunication.

The friary was regularised in 1486 when Pope Innocent VIII granted a brief of foundation to Burrishoole on 19 February.  The bull stated that this was because ‘the immense benignity of the Apostolic See always complies with the pious desires of the faithful of the religious orders and benevolently grants their requests’.  The Archbishop of Tuam was empowered to absolve all those involved of the guilt and punishment they had incurred due to their actions.  The friars were granted permission to construct a church, tower and bell, in addition to domestic quarters.  These elements were constructed in a piecemeal fashion as resources became available from patrons of the friary, in a manner typical of late medieval friaries in Ireland.

In analysing documentary accounts of the early history of Burrishoole friary, the reasons for its hasty establishment become evident.  The Annals of Connacht for 1469 record:

“Richard son of Thomas Burke resigned his lordship and Richard son of Edmund Burke was made king in his stead; and in very sooth this is no ‘tone for an egg’”

Having resigned his lordship, Richard took the habit of the Dominican order and joined the community of friars at Burrishoole.  This indicates the esteem in which Richard held the Dominicans and suggests that his decision to found the friary may have been motivated, at least in part, by the desire to establish a spiritual retirement home for himself.  Richard died in 1473.  The Annals of Connacht record his death stating that he had resigned his lordship ‘for the sake of God’.  It appears he deemed the action of spending his final years in a friary as atonement for the sins he had committed during his lifetime.  Many men and women entered the monastic life at a young age but others did so later in life after the death of their spouses.  Indeed, elderly couples might take religious vows in separate monasteries and end their lives apart.  ‘Taking the habit’ was not a commitment to be entered into lightly, as removing the habit was considered apostasy.  Even in the medieval period, retirement had its challenges, as the Dominicans of Burrishoole discovered.