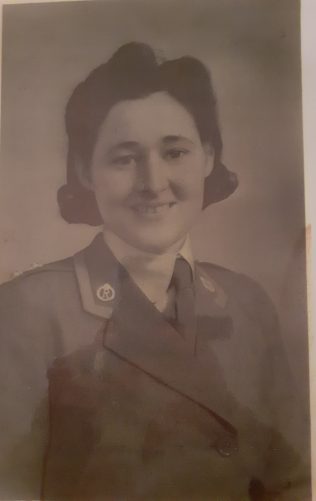 These amazing women deserve to be honoured for their heroic service to humanity.

Michael Feeney in his book Remembering Mayo’s Fallen Heroes  has covered the excellent courage of these women during the traumatic events.

Nurse Kathleen Gilmartin O B E daughter of Thomas & Mary Gilmartin Laughty, Ballina as a member of the British Royal Navy Nursing Service was the first woman awarded an O B E.  She wrote a letter to her mother from the HMS Peregrine Royal Navy Air Station with the news of her forthcoming award.  She stated that ‘I saved the lives of a  sub-lieutenant and a woman during an air raid at this station.’  She also stated that she was abroad a land station that there was no need to worry!  In her own words ‘Send me a Sacred Heart Badge & say a few prayers for me…I am the first nurse in the Royal Navy to be presented with the honour.’ (The Irish Times 17th June 1955 )

Nurse Bridget Quinn daughter of Patrick & Catherine Quinn Church field, Tourmakeady was employed at a Hospital for Nervous Diseases, in Regents Park, London.  She was killed along with her eleven patients (whom she refused to leave ) when the hospital took a direct hit from a bomb on the 18th June 1944. A colleague nurse Margaret Patterson was left blind for life by the attack. Bridget Quinn  was honoured during 1954 when a new ward at the rebuilt Hospital at Deane Street was named after her with a plaque unveiled by the Mayor of Westminster Alderman Patrick Stirling.  Among the attendance were her mother plus two sisters Kay & Nora. (The Irish Times )

Nurse Bessie Boyle daughter of Bridget & Michael Boyle Coarsepark, Castlebar  led a very distinguished career in her army nursing service.  She received several awards for her ministration to her patients during WW2 that included the following: the 1939 -1945 Medal, the 1939-1945 the Italy Star plus the Africa Star.

Michael Feeney references another nurse Margaret Johnson who was killed during an air raid on 28th September 1944.

Would any reader have information on this person so she may be honoured fully?

Bessie Boyle’s story may be viewed at this site: https://www.ouririshheritage.org/content/archive/people/101_mayo_people/military-revolutionary-activists/bessie-boyle-2

One may read Bridget Quinn’s story at this site: https://www.ouririshheritage.org/content/archive/people/101_mayo_people/military-revolutionary-activists/pat_mcnicholas-2

Kathleen Gilmartin’s story is available at this link.