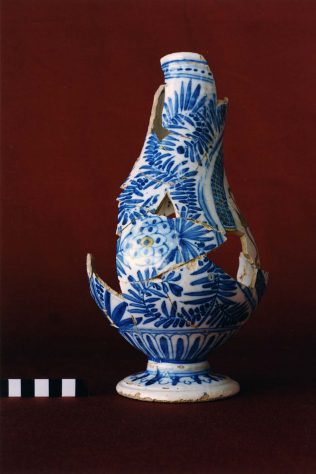 The objects in questions are is a Portuguese faience vase found in a stone drain in Quay Street and two tile fragments found at Merchants Road.

Two tin glazed tile fragments from the Galway City Museum, while now merely fractured remnants, proved intriguing and prompted this research to consider their origins and the historic circumstances of their production. The current information provided on the two finds from Merchants Road in the 1988 is that they are of presumed Anglo or Dutch origin, and that they are both estimated to be from the year 1550-1650.

A Portuguese faience vase of tin-glazed earthenware dating from c. 1600, has similar technical features to the tile fragments. The current information of this vase was that it was found in a stone drain and it was of Portuguese origin. It is decorated with a dragon motif in blue and yellow on one side and on the other side is a spiky foliage pattern.

There are noticeable differences between the tile fragments, but both are polychromatic, and the loosely painted motifs were both quite gestural. During the late 15th century, tin-glazed earthenware was beginning to be produced in the Netherlands. Soon potteries were being established in not only the Netherlands, but Amsterdam, Rotterdam, and Haarlem as well. The town of Delft had become a center of production by the late 17th century, and nearly thirty companies were operating in that area.

Earthenware is pottery made from porous clay which is fired at low temperatures. Examples of this are faience, delft and majolica. Tin-glaze earthenware is earthenware which has been covered by an opaque glaze. It is decorated with colours that need to be fired at quite high temperatures. These colours are painted on a fired body which has been coated with unfired glazed material. The second time it is fired, at lower temperature so as to fuse the pigments of colour so they do not blur. Mesopotamians improved this method and it later spread to Spain and onto Italy.

Portuguese Earthenware has similar characteristics to oriental motifs from the Chinese blue willow pattern. The same tone of cobalt blue is used. The stylistic characteristics of faience derive from the growing fascination of Chinese ceramics and oriental style.

It is unlikely that the tiles are of British origin. Dutch ceramicists first arrived in London in 1570, but their work was almost exclusively produced for Apothecaries, the production was relatively small scale in the 16th century compared to the 30 workshops simultaneously producing works in Delft, Rotterdam, Haarlem and Amsterdam. It was not until the 18th century that delft was common place in Britain and delft workshops were set up in London, Bristol and Liverpool. How these objects came to be found in Galway is unclear. We can only assume that they arrived when Galway was at the peak of trade. Looking at the link between England and Galway for trade, it is conceivable that they came along the same trade route that brought the Devonshire pottery to Galway.

For centuries ceramic possessions were displayed in dressers, on mantelpieces and hall tables. The dresser in a house was a very important piece of furniture. It was considered “the pride and joy of the kitchen” (Kinmonth, 2006, 53). Apart from the functional use of such objects ceramics were displayed to impress the visitors, and owners would be proud when their visitors praised their china display. China wasn’t thrown out if it was damaged even in wealthy households. It was still displayed even though it was unusable. Tiles like these would have been on display on skirting boards, around fireplaces, or simply mounted to the wall/panelling and framed with oblong matching tiles.