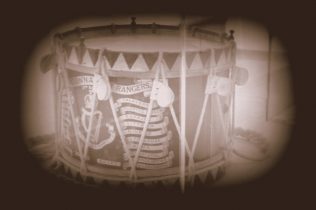 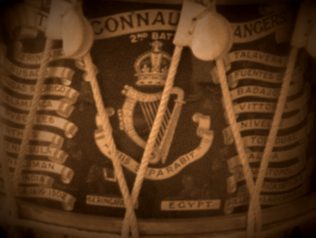 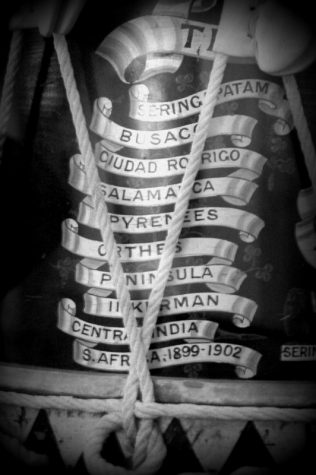 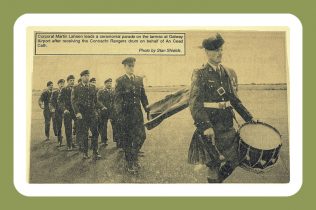 zoom
"I am fortunate in my choice of exhibit because it was not the first time I have had to interpret its significance, albeit in a different context" says article author, Martin Laheen, seen here leading a ceremonial parade on the presentation of the drum to An Céad Cath, an Irish -speaking battalion based at Renmore barracks, Galway.
Stan Shields (photographer), Connaught Tribune, August 1990.

This drum, of military origin, is made primarily of timber and ceremonial standard rope. The head is most likely made of animal skin, similar to the Irish bodhrán that we know today. The function and everyday uses of this object will be examined within this article for wider meaning. In doing so, the hope is to move beyond seeing ‘objects as mere tools with mundane functions, but cultivate the view that ‘objects are not just “things”, rather they are reflections of the wider lives of communities and individuals’ (Emmison & Smith, 2000, 145).

From a visual perspective, what catches the viewer’s eye are what is known in military parlance as “battle honours”, that is, the locations where members of the unit fought and died. These “honours” are inscribed in a calligraphic banner style on the front of the drum.

Historically, the drum belonged to the Connaught Rangers, who were an Irish infantry regiment in the British army, prior to Irish independence. They had a long association with Connaught and Galway in particular, until they were disbanded in 1922.

From a functional acuity, the drum would have been used in all the military ceremonial functions conducted by the Rangers. Moreover, it also helped in promoting awareness of the unit, particularly in recruiting drives. One can attempt to imagine the scene, this drum beating a steady staccato up the main street of the small rural Irish town, the battle honours in full view, all the while appealing to the adventurous spirit of young Irishmen to join the army and escape the mundane.

From a social perception, the drum omits a multitude of subliminal messages challenging the man to prove his manhood by “taking the Kings schilling”. Today, we find it difficult to comprehend this mode of thinking. During the time that this drum was in everyday use, deeply engrained gendered divisions of labour were very prevalent in Irish life and across the western world. The drum tapped into these social “norms”. It was used to “normalise” notions of manhood, and the bearing of arms in defence of ideals.

Within the museum, the drum is one exhibit among others comprising a military section that brings to life, the British army presence in Galway prior to Irish independence. Within this section, the drum is centrally located in the middle of the floor. By facilitating a 360-degree view, one is presented with the opportunity, to deeply engage with the drum. Within the museum environment, Vasconselos contends, that as artefacts are ‘removed from their structure’, in this case, a long past military environment, their ‘function becomes loosened’, and they become neutral in a sense. Thus, the viewer must place himself or herself in the context of its working life. By doing so, we challenge ourselves to think more deeply on what this drum meant to who played it, and more importantly, to those who listened.

The drum is currently on loan to the Galway City Museum, courtesy of the military museum at Mellows barracks in Renmore, a suburb of Galway city. This is significant because as stated earlier, this barracks was home to the Connaught Rangers in the pre-independence period. The drum was formerly the property of Colonel F.W.S. Jourdain, a former captain in the Connaught Rangers, who died in England in 1990 aged 92. Jourdain’s brother-in-law, Brigadier General Alastair McGill, presented the drum to Renmore barracks.

The old drum has finally come home. In the words of the American poet, Oliver Wendell Holmes Sr., “where we love is home, home that our feet may leave, but not our hearts”.