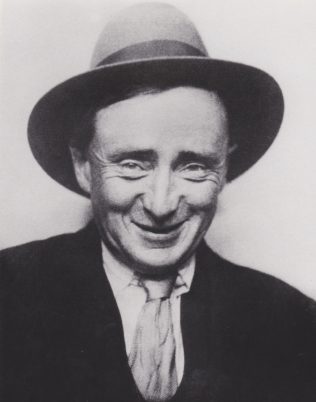 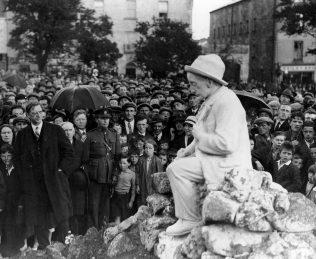 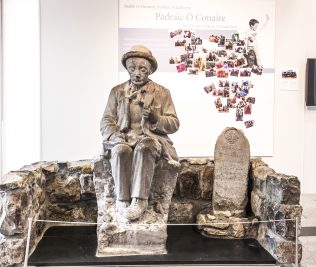 Pádraic Ó Conaire the first modern writer to earn his living writing exclusively in the Irish language. The statue of Ó Conaire is currently located in the lobby of Galway City Museum.

The figure was sculpted out of limestone by the renowned Irish sculptor Albert Power (1881-1945) and was erected in February 1935 in Galway’s Eyre Square. The project began in 1929, one year after the death of Ó Conaire, after some members of the Galway Gaelic League met to consider erecting a monument over the writer’s grave. With this objective in view, a circular was sent to members of the league and others interested in its activities, and in response to this initial appeal about £200 was raised.

Albert Power, born on 16 November 1881 in Dublin, was widely regarded as one of Ireland’s leading sculptors of this time because of the political character of much of his works as well as it’s distinctly Irish vein. It was in early February 1930 that Power attended his first meeting with the committee in Galway and produced some sketches from which a choice could be made. It was at this stage he estimated that the statue would cost about £280. Power was requested to prepare and submit to the committee a detailed estimate for the work as soon as possible. He was, however, renowned for delays in matters of business, and was to take some months before submitting the estimate. Once his final estimate was known and approved, much effort was then expended to raising the amount needed for the monument.

Among those who donated and subscribed to the project were Lady Augusta Gregory, who had sent a cheque for one guinea to the committee, and Dr. Tuohy, who was the father of the artist Patrick Tuohy who had recently committed suicide.

There was some concern that Power might not complete the commission on time, as it was planned to be ready before St. Patrick’s Day, 1931. His instincts were to prove to be correct as it was to be four more years before the statue was finished.

Difficulties in finding a suitable block of limestone was one delay for the sculptor and indeed the committee as they were united in their insistence that only the most perfect piece of stone would do, and if necessary they were prepared to wait for one to be found. Once this stone was found it was finally sent to Attanagh station awaiting delivery by rail to Dublin, and Power finally began the carving of the statue in November 1932.

The unveiling was set for Whit Sunday, 9 June 1935, and at a meeting in early March it was decided to invite Éamon de Valera to perform the ceremony. As political leader of the country and a man passionately interested in promoting the Irish language, it seemed doubly appropriate. De Valera was delighted to accept the invitation as he was a long admirer of both Ó Conaire’s writings and of Power’s work.

Power’s success with his depiction of the writer was recognized immediately for his ability to conjure up the man as if still alive and sitting on a wall, recording his thoughts. Ó Conaire had been renowned for writing sympathetically about very ordinary people whose lives were not marked by success but rather by mistakes and failures of all kinds, which makes this one of the reasons why the people of Galway were able to identify with the piece and welcome it with an open heart.