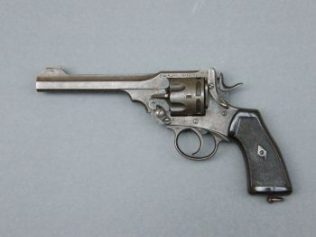 zoom
The Webley Mk VI revolver was manufactured by Webley & Scott, Birmingham. It became their best-know model, being officially adopted in 1915, during the Great War (1914-1918).
Courtesy of Galway City Museum.

This Webley Mk VI revolver is a symbol of the conflict between the IRA and Crown Forces throughout 1920. According to its donor, whose uncle was a local volunteer, the weapon was confiscated in 1920 during a raid on a social event at Taylor’s Hill attended by Crown Forces.

On 21 January 1919, the first Dáil Éireann convened in the Mansion House, Dublin, and unanimously adopted the Irish Declaration of Independence. That same day at Soloheadbeag, Co. Tipperary, the IRA ambushed members of the RIC, shooting two constables in the process, and thus began the War of Independence (a.k.a. the Black and Tan War or the Anglo-Irish War).

Throughout 1919, the IRA mounted a campaign against government forces employing guerilla warfare tactics. In response, the following year the British Governmnt deployed two paramilitary groups – the Black & Tans and the Auxiliaries – to Ireland to bolster the flagging and demoralised RIC.

In Galway they arrived to an already heavily garrissoned town, and quickly gained a bad reputation for their attacks on and attitudes towards the civilian population. As 1920 progressed, violence escalated in Galway City and County with attacks by the IRA and Crown Forces intensifying. The Galway Express, a local republican newspaper, was targeted and put out of business. The Galway Observer and the Connacht Tribune, both constitutional nationalist publications, gradually drifted towards republicanism.

Nationally, the political supremacy of Sinn Féin was consolidated in the 1920 local elections,which had resulted in a strong Sinn Féin majority within the Galway Urban District Council and Galway County Council.

In May 1920, John Furey and Michael Joyce of Oranmore, having been interned in Galway Jail for the illegal possession of arms, went on hunger strike until accorded the treatment of political prisoners. The support the hunger strikers received in Galway worried the authorities as the town was traditionally seen as one which was loyal to the Crown (Kenny, 2011, 29).

On 19 July, four RIC men were ambushed near Tuam, with two fatalities; the Black and Tans responded by sacking the town – the first of many such reprisals in the country.

In June-July 1920, the Connaught Rangers (associated with Renmore Barracks) mutinied in India in protest at “atrocities” committed by British forces in Ireland.

On 8 September, a gun battle at Galway Railway Station resulted in the deaths of Edward Krumm, a Black and Tan, and two volunteers, Seamus Quirke and Seán Mulvoy. In the aftermath, the town was placed under curfew. On 15 October, Patrick Joyce, the principal of Barna National School, was executed by the IRA having been found guilty of being an informer. On 19 October, Councillor Michael Walsh, of the Urban District Council, was murdered by the Black and Tans; having been taken from his home on High Street, he was shot through the head on Long Walk and his body was dumped into the Corrib. On 14 November, Fr. Michael Griffin, a known republican sympathiser, was taken from his home at Montpellier Terrace and shot through the head; his body was disgarded in a shallow grave in a bog near Barna.

However, these tragic events were to be overshadowed. The day after Fr. Griffin’s body discovered – 21 November 1920 – became known as Bloody Sunday. That morning, 18 members of the ‘Cairo Gang’ – a team of undercover agents operating in Dublin – were killed in an attempt to eradicate British intelligence within the city. In response, later that day, the RIC opened fire on a crowd attending a Gaelic football match in Croke Park, killing 14 civilians.

The violence continued into 1921. A truce, forced by stalemate, was called on 11 July thus ending the War of Independence.

Where to see it …