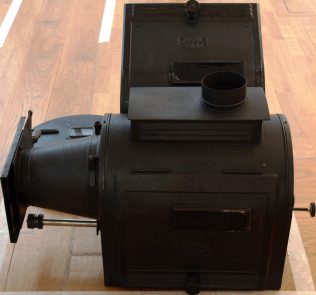 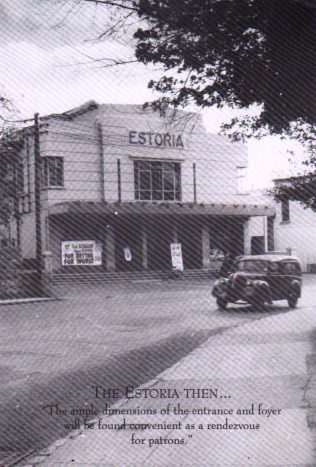 zoom
The Estoria cinema opened in 1939.
Courtesy of Fred Diviney. 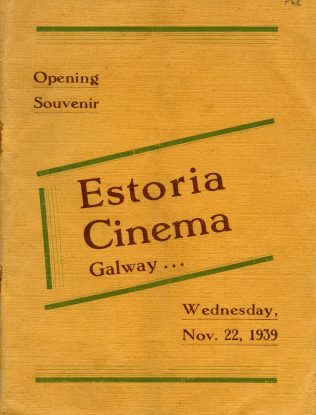 zoom
Programme from the opening of the Estoria in 1939.
Courtesy of Kieran Hoare, NUIG. 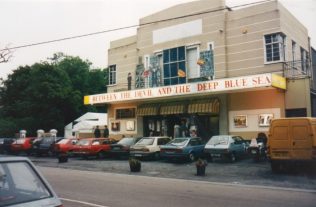 zoom
The Estoria became The Claddagh Palace in 1975.
Courtesy of Fred Diviney 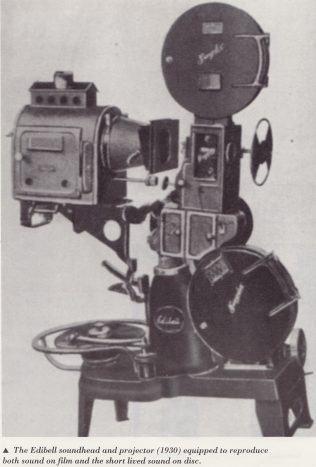 The Light-box is all that remains of a once fully functioning cinema projector, used in the old Claddagh Palace cinema in Salthill, Galway. This venue, formerly known as the Estoria operated as a cinema from 1939 to 1995.  The 776-seater cinema was built by John McNally of the Estoria Cinema Company, Ballina and was based on the cubist design of Hubert O’Connor, M.D., University College, Galway. The first film shown in this venue was The Great Waltz screened on 22nd November 1939.

Cinema touched on the lives of many for the employment it created and the entertainment it provided. Frank Rafter managed the Estoria for almost 40 years when admission was only 2 shillings for balcony, 1s 4d for partere back-stalls and 9d for front seats.  Down through the years the Estoria has been referred to as the ‘Ashtore-a’ or the ‘Shtoa’, before eventually changing to the Claddagh Palace under new management.  Cinema posters provided the first glimpse of upcoming films and Frank Devlin played a central role in providing this cinematic colour.  Unfortunately as technologies advanced the poster trade dwindled. Today the posters, like photographs, ignite all kinds of memories for all kinds of people. Other cinematic professions included the Bill-Sticker, Ushers and Usherettes, Box-Office personnel, Assistant Operator, Chief Operator and of course the film could not happen without the Projectionist.

The first technicolor film screened was Trail of the Lonesome Pine and popular favourites that followed include Seven Brides for Seven Brothers, The Informer, Casablanca, Gone With The Wind, and They Died With Their Boots On among many many more . These films introduced Galweigans to whole other worlds outside of their own. Kids looking for adventure and escapism flocked to the cinema turning to Roy Rogers, Hopalong Cassidy and Tarzan as their heroes. The Cinema provided a backdrop to social life in Galway. In the early days there was a cafe upstairs and musicians used to play before the film started. After the war, venues had to have live music in order to avoid paying tax and so music became a regular part of the cinematic experience.

The Claddagh Palace hosted many film premieres including My Left Foot and The Quiet Man attracting stars like Daniel Day Lewis and Maureen O’Hara to this local venue. Films like these, shot in and around Galway drew in the crowds and the memories of these celebratory events live on. One story from the archives of Galway Advertiser records an incident involving the projector. During the war some of the sprockets from one of the Projectors broke leaving only one that could function correctly. Rather than changing the reel every twenty minutes, then manager Frank Rafter had a special wooden reel which allowed them to run the entire film at the same time and so avoided disruption. Even today the light-box projects many layers of nostalgia.  Retired cinema staff like Fred Diviney, talk about the skills required to operate it and yesterday’s children recall the ‘magic’ once released from this mysterious ‘black box’. The closing of the Claddagh Palace in 1995 marked the end of an era for this old style social activity.

The Light-box is currently on display at the Galway City Museum as part of an exhibition entitled, ‘Cinema, Galway Goes to the Pictures’.  Also featured in the exhibition are a pair of speakers from the Claddagh Palace, a collection of John Ford material and a display of old cinema posters.