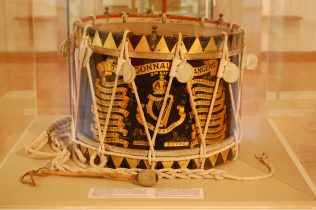 This was the ceremonial drum of the 2nd Battalion of the 88th Regiment of Foot, also known as the Connaught Rangers. It has a wooden frame with an unknown animal skin stretched over the drum with a rope harness in place that would have undoubtedly been replaced at some point in the history of the object. The drumstick is also included which the record of the most famous battles that the regiment saw action in emblazoned upon the main body of the drum. It would have been carried into battle by usually a young boy charged with the task of keeping time for the regiments march.

The drum is a key piece in an exhibition entitled ‘Galway and the Wars of Empire’ and could be interpreted in many ways. The least of which is Ireland’s connection to the British Empire during a time in which almost one third of the British Army was made up of Irish recruits. It could also be seen as a representation of the connection the rangers had with the city of Galway.

The Connaught Rangers were part of a large recruitment drive that took place in the final decade of the 18th Century. It was largely due to the intensity of the French Revolution and the removal of their monarchy by the people of France. In 1793 the Earl of Clanrickard and they went on to become one of the most distinguished regiments in the British Army in the Napoleonic Wars and various other uprisings within the Empire itself. The barracks which is still in existence in Renmore, a suburb of Galway city, was built in 1852 once the official home of the Connaught Rangers was recognised. All of the battles listed on the ceremonial drum were key events that the regiment was involved in such as Vittoria and Badajoz from the Napoleon campaign. The Rangers saw action in later years during the Indian mutiny in 1857 and the Boer War which took place at the turn of the 20 th Century. World War I was also a call to arms for this regiment and they fought in every major battle of the Great War and were not present in Ireland at the time of the 1916 rising or during the War of Independence. In 1922 when Ireland became a Free State it was announced that the regiments of the British Army in the South would be disbanded and the Connaught Rangers were amongst these. While the formation of an independent Irish State was the dawn of a new era in many ways it was the beginning of the end for those traditions that had grown through a centuries old rule, however the Connaught Rangers are always proudly remembered in Galway history.