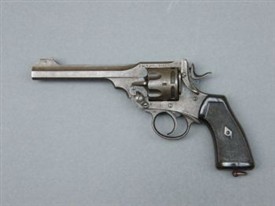 The Mark VI Webley Revolver in the Galway City Museum is an intriguing object linking back to a history of Imperial British military force and conscription and the ultimate subversion of the weapon back upon the British in Ireland in local rebellion. The Revolver was given to the museum’s collection as a donation from Sean Crowe in Waterford. These revolvers were created by the Webley Company which was established by Philip Webley in 1915. He created the first Webley revolver design on March 29th 1853. This particular revolver was a standard British army issue during World War I, (1914-1918) when it was described as a “British soldier’s strong right arm”. The First Webley Revolver to see Military service were privately purchased by the British officers in and around 1854 and used in wars throughout the world. Over three hundred thousand of these revolvers were made for service during WWI. The six shooter revolver featured the famed stirrup latch, had a four inch barrel and parrots beak grip. It was loaded by pushing forward on the latch and dropping the barrel to expose the chambers. The gun was then snapped shut and after rounds had been expended it was again broken up, there was a spring loaded star extractor ejected the empties. The gun was rugged, reliable and popular with the troops.

This Webley Mark IV revolver was confiscated by the Irish volunteers from British soldiers during a social event at Taylor’s hill, Co. Galway. During all the troubles Galway was never a hotspot for the rebellion as there was a large number of crowned forces in the city at the time. There were at least two thousand soldiers quartered here. The auxiliary division which was made up of former British soldiers were based in Taylor’s Hill and the Retreat in Salthill at the time. With the strong military presence over the years in Galway there would have been a natural intermingling of Galway’s townspeople and the military force at social and sporting events in Taylor’s Hill and around Galway.

At this time in Ireland County Galway was acknowledged as being the most loyal county to England. Overall Ireland was supplying nearly 60% of man power to the British navy and army force. Bohermore situated outside the city centre was commonly known for supplying young men to the British army for overseas war. Most of the population of men in the Claddagh were highly experienced sea men and they supplied a lot of man power to the British navy. However the tide turned during the war of Independence and the Irish Republican Army or ‘old IRA’, benefited from the widespread help given to them by the Irish population who generally refused to pass information the RIC and The British military and who often provided ‘safe houses’ and provisions to the IRA units on the run.

Much of the IRA’s popularity arose from the excessive reaction of the British ‘black and tans’ forces to IRA activity. The British responded to the escalating violence in Ireland with increasing use of force, reluctant to deploy and sending regular British army into the country in large numbers. They set up two parliamentary police units to aid the RIC. In 1921 both sides agreed to a ceasefire. After this the Irish Free State was established. The Webley Mark IV revolver is now decommissioned as a weapon but as a museum object it is a potent document military presence, political allegiances and the struggle for national autonomy that is part of Galway’s history.