A History of the British Army Redcoat & the Galway Militia 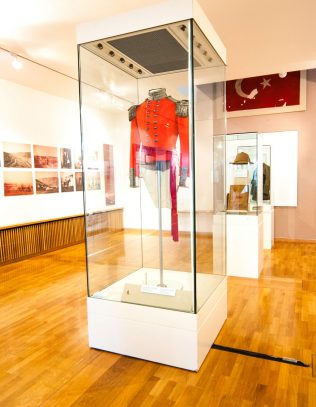 This Galway Militia officer’s coatee closes at the front and cuts across the waist, leaving the tails as ornamental skirts behind. Coatees were worn in the late 18 th century and early 19 th century, and were replaced by the tunic in 1855 (Usher, 2009) s o this coatee dating from 1846 would be one of the later versions of the red coat, and would mostly have been used for ceremonial wear. The distinctive crimson red colour of the coats was believed to have been first chosen to mask blood stains and so preserving the soldiers moral during combat. It was in fact chosen as red dye was cheap and plentiful at the time and meant that the cost of producing the uniform would be reduced as the dye process would only have one sequence (Carman, 1957).

Officer’s coatees were not mass produced, or even provided to the officer upon their promotion. All officers and generals where in fact required to provide their own uniforms, which entailed commissioning their local or family tailor to fit the uniform for them at their own expense and it was not until 1802 that there was any serious attempt to regularise officer’s dress. Many generals would have their family crest embroidered onto his regiment’s uniform resulting in many variations and personalisations of the red coat element of the uniform. Each regiment had its own variation and the officer’s coat would have been tailored to the taste of the individual officer or general such as the detailing on the shoulders and cuffs. Many of the details such as buttons and helmet pins were also individualised and distinctly different from regiment to regiment, but the harp with the royal crown became the emblem of all Irish regiments (Usher, 2009).

The Militia, or irregular army, is a military force made up of ordinary men. Names were drawn from a list of fit men from the ages of 18 to 50 who were deemed eligible to fight. Initially the Militia was raised on a county wide basis and was manned exclusively by Protestant residents. This changed in 1793 when the Irish government passed an act to sanction the Militia on the basis of service in Ireland, and that it was to be drawn from both Catholic and Protestant communities.

Once an honourable experience to be seen in a red coat, you were deemed as brave and fighting for your country. This changed to being a sign of betrayal and an allegiance to the Crown, who no longer has political associations with Ireland. In a sense, the coatee’s representation has moved from one of admiration to one lacking in honour. The political changes that occurred in Ireland which, in turn, impacted on how the coat is now viewed, have also had an effect on how the coatee should be displayed in a museum. Despite the fact that it is an historical artefact, for many years it was not seen as socially acceptable to acknowledge our past links with the British monarchy. Attitudes towards the status of the coat as a symbol of service to the crown underwent changes from honourable to dishonourable in the eyes of the Irish people. It is also not just a uniform anymore, it’s a symbol of the style of the time in which it was produced and the quality of product that was produced in Ireland at the time. It also shows the personality of the officer who wore it through the personalised cuffs, shoulders and tails of the coatee. This personalisation of uniforms shows the pride of the officer who wore it in the Militia in which he served.