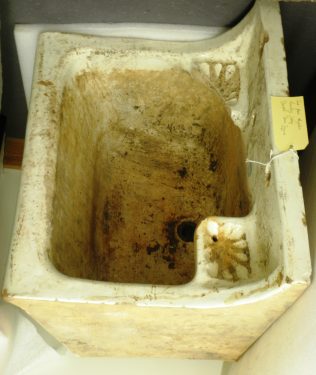 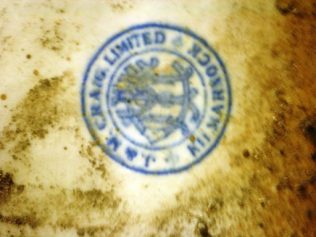 The sink was discovered in the rubble of the old Magdalen Laundry site in Forster Street Galway following its demolition in 1991. Measuring 25″ in width and 21″ in height it is a sizeable 12″ deep. It’s story too is deep and the stains of its past difficult to wipe clean.

In 1870, St. Vincent’s Sisters of Mercy acquired a house in Forster Street Galway where they established a laundry, to become known as the Magdalen Laundry. ‘Magdalen’ referred to the biblical Mary Magdalen, a prostitute who only won the love and forgiveness of Jesus after years of loyal service. When similar institutions were shutting down across Europe and America the Magdalen Laundries were evolving dramatically in post-colonial Ireland. In the state’s attempt to establish a national identity they prioritised morals such as conformity, community and Catholicism. Historically a ‘refuge’ for the so-called ‘fallen’ women, and for those perceived as being in moral danger, Ireland’s 20th century Magdalen Laundries became asylums for society’s ‘hopeless cases’, ‘mental defectives’, infanticide cases, those on remand from the courts, transfers from industrial schools as well as voluntary entrants. These institutions grew from the complicity of Church, State and Society. Society as a whole allowed for the incarceration of unmarried mothers, ‘illegitimate’ and abandoned children, orphans, those labelled as ‘sexually promiscuous’ or ‘socially transgressive’ as well as those accused of simply ‘being in the way’. In other words, any woman who did not fit the mould for an ideal Ireland was separated from society.

These women spent their lives as ‘penitents’ in the service of the Sisters of Mercy on account of society’s judgement of them. Their days within the convent were filled with harsh, thankless tasks such as washing prison uniforms and clerical garments, cleaning of hotel linens and caring for elderly Sisters. Although the laundries were not unique to Ireland their longevity was – women were still entering in the 1980s and the last Magdalen Laundry in Ireland only shut its doors in 1996.

Today there is greater freedom to speak out about aspects of our nation’s history which were for so long constrained by stigma, secrecy and shame. Although we do not have access to the church’s archival documents pertaining to the Magdalen’s stories we can at least listen to the women who lived them. Through acknowledging mistakes of the past we can ensure that as a society we do not repeat them in the future.

The Anglo Irish Bank now occupies the site of the old Magdalen Laundry and not far from it is a monument commemorating the Magdalen sisters who fell victim to the Ireland of yesterday, so far removed from today. Perhaps increased awareness will, in time, allow for greater understanding.