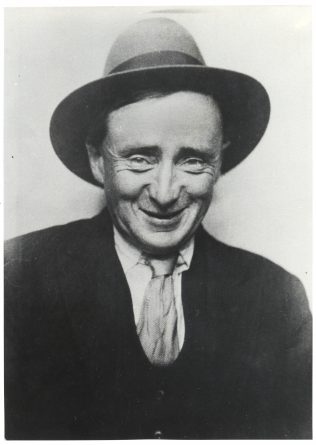 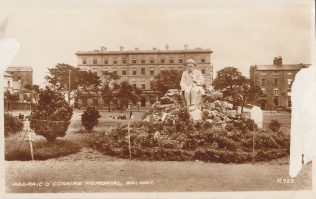 The statue of Padraic O’Conaire which is currently situated in the Galway City Museum, is a limestone carving of the author depicted in a reflective pose sitting on a traditional hand built wall like that of any wall found in a Connemara field of yesteryear.

Pádraic was born on February 28th 1882, the son of a publican, on new dock street in the heart of Galway’s dockland. Orphaned by the age of eleven, he and his brothers ended up moving to their father’s family home with their grandmother in Garaffin, Ros Muc, which gave them somewhat privileged access to middle class culture. This is where O’Conaire became interested Gaelic and the Irish speaking locals.

Padraic was educated at Blackrock boarding school where he met fellow class-mate Éamon de Valera. At the age of eighteen O’Conaire left Blackrock College early and moved to London where he joined the Gaelic league, an institute founded by Douglas Hyde and Eoin McNeill (1893), the aim of which was to preserve the Irish language and traditional Irish sport a nd to reintroduce the Irish language in schools. Meanwhile, O’Conaire was writing for the Gaelic Leagues newspaper, An Claidheamh Soluis (the Sword of Light) where he wrote stories about social injustices. His work became unpopular with the Gaelic League, probably due to the fact that Hyde wanted to keep the institution apolitical. The Gaelic League’s newspaper editor Padraig Pearse, however, defended the work of O’Conaire against his critics (O’Corrain, n.d.).

By his early twenty’s Paidraic had already made close links with three of the most important and influential men in the fight for Ireland’s political independence: Éamon de Valera, Patrick Pearse and Douglas Hyde. Pearse, one of the leaders of the Easter Rising, was declared president of the provisional independent government and was executed on the 3 rd of May 1916 aged 36. Douglas Hyde, became the first president of Ireland 1938. Éamon de Valera became Ireland’s third president on 22nd June 1959 narrowly avoided execution after his involvement in the Easter Rising.

Padraic O’Conaire left a legacy of 26 books, 473 stories, 237 essays and 6 plays which were all written in Irish. Amongst his most famous works is the novel Deoraiocht (Exile) which was translated by Gearailt Mac Eoin. O Connaire’s talent for writing led him to winning the Oireachtas prize in 1904 and 1909.

The sculptor of this memorial statue of O’Conaire, Albert Power, became one of the leading sculptors in Ireland during the late 1920s and 1930s. In June1935 the piece was unveiled in Eyre Square, in front of large crowd by Éamon de Valera, Padraic’s old class mate. Power chose to depict Padraic without the grandeur of the originally intended pedestal, in more naturalistic state seated upon a traditional West of Ireland stone wall.

This piece became part of the city’s habitat and was not only embraced by locals referring to him as Sean Padraic meaning ‘Old Padraic’ it also became customary for visitors to Galway to have their picture taken with him sitting on his lap. A statue can tell a story without language native or foreign. Over time the meaning and message of the statue has changed. This stone sculpture speaks of a time when we fought for our culture and heritage and will remain a symbol of this hardship. While it may be argued that its current location may dilute its message and narrow its audience, the Galway City Museum plays a role in the preservation of the work, and nearly 80 years on it’s still here in Galway.