Sewing Spangles in the Face of Adversity 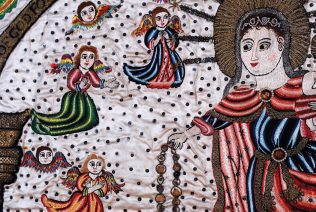 With Cromwell and his army terrorising and crusading through Ireland in 1652, the Dominican Nuns of Galway had no choice but to flee for their lives to the convents of Bilbao in Spain. There they could seek refuge and peacefully practice their monastic discipline safe from Penal Laws imposed by Cromwell and the persecution that followed.

Convents were centres of embroidery production and considering the devotion to the church and the love of the ceremonial that were deeply rooted in the Spanish temperament it is not surprising that this age of affluence produced large numbers of luxurious vestments and religious embroidery (Johnstone, 2002, 81). One Dominican Nun in particular, Sr. Margaret Joyce, used her time in Spain to craft an exquisite Altar Frontal.

Crafted by Sr. Margaret Joyce and completed on May 1726, the extraordinary Dominican Altar Frontal is a wonderful representation of a bustling and thriving textiles industry during the 17 th and 18 th century in Europe. It is reputed to have been used at the Slate Nunnery, (now Busker Browne’s) Karan’s Lane, Galway.

Today, the Alter Frontal along with the other vestments including chausables, chalice covers and lectern veils are currently in storage in the Galway City Museum. The pieces are remarkably intact and in pristine condition, the embroideries bright and awe inspiring. Even more so when realised they were produced nearly 300 years ago.

Looking at the Altar Frontal we can see how it depicts the Virgin Mary with Jesus on her lap, flanked by St. Dominic and St. Catherine which have been appliquéd in a black loose warped linen blend fabric. Along the outer edges are many birds and animals and floral motifs drawn from the bible. The whole composition is very reminiscent of the Garden of Eden with its clear emphasis on nature.

The Altar Frontal itself is a single panel of Silk satin appliquéd to a linen mix fabric backing. It has been intricately hand sewn with great care and skill using silk and metallic thread in festive colours contrasting against the white silk background. Each motif and meandering vine has been hand worked using long and short satin stitch evolving into encroaching satin stitch. This technique involves different coloured thread working side by side to blend harmoniously without the use of line to define sections giving a more fluid juxtaposition of colour. Each figure has a black chain stitch outline giving definition on the white silk ground. There are over 15,000 intricately placed French knots worked in gradients of green silk thread on the surrounding border of the Alter Frontal giving a textural representation to the foliage depicted in the Garden of Eden.

The Altar Frontal has also been heavily embellished with individual sequins, gemstones and bead work. Pearls and beading have been added to key areas such as the Virgin Mary’s clothing in the centre column. Extra embellishment, emphasising Mary’s importance, were gems that had been fixed with an adhesive to represent the Virgin’s rosary with all but one lost to time.

A prominent symbol featured repeatedly in the altar frontal is the rose. Like the lily, the rose is one of the flowers most closely associated with the Virgin Mary. A white rose stands for purity, red for martyrdom. The thorns symbolise the sins of man, therefore the Virgin was described as a rose without thorns (Gray, 2012).