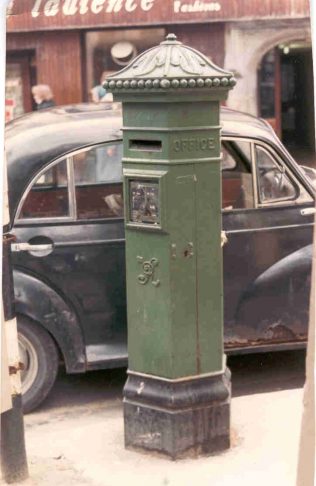 The Penfold Pillarbox that once stood on Mainguard Street, Galway, was designed by John Penfold, a British architect. The boxes were first produced in 1866 and was made in three different sizes with subtle differences between rural and city boxes. In the thirteen years that it was in production and used throughout the British Empire, the post boxes changed quite a bit due to an early design flaw; the aperture was high up on the box and had an up-shoot, which caused letters and newspapers to get caught. This was then changed in 1872 to a down shoot and the aperture was lowered. It is a hexagonal pillar box and is decorated with Acanthus leaves on the lid and features the Post Office mark and the Royal crest to show ownership of the postal system. Originally there was a ball on the top of the lid but it has been missing for some time. It has now been replaced by a modern ball to restore its original appearance. Now it is a ‘protected sculpture’ which is on loan from An Post by the Galway City Museum. ‘Galway is lucky enough to have not just one but two examples of Penfold style letterboxes’(Galway’s Heritage, 2005) as they are very rare among Ireland and the UK with only 300 made and 150 surviving.

A wealthy London merchant, Thomas Witherings, was appointed postmaster of England in 1635. He reformed the British postal system by charging fixed rates for letters, determined by distance. At this time Irish post was delivered by cavalry. Mail from royalty was of utmost importance and mail between the general public was sent whenever there was time, but it was expensive and unreliable. Witherings was then asked to establish the same system in Ireland.

By 1653 post offices and systems were established in Belfast, Coleraine, Derry, Sligo, Galway and Cork. The ‘remote’ parts of Ireland, away from the main route of the postal carriers, were delved only twice a week. The post was carried by post boys on foot or on horse. Oliver Cromwell founded the first post office so that troops had better communication. He established the general Post Office for Ireland in 1638. With the new postal system and the introduction of penny postage, it was easy and affordable to send letters which made the demand for more post boxes to be set up.

There were three different types of post boxes: lamp post box, which was a rectangular post box on top of a short pole; wall post box, this one was encased and supported by a wall; pillar post box, a free-standing pillar box. The post boxes were painted a dark green to blend in with the countryside. Because the post boxes were such a subtle shade they actually caused many accidents, so it was decided in 1874 to paint them red so that the post boxes would be visible and cause less damage. The colour red also symbolised the British.

Over the years the colours have changed. In 1922 when Ireland became a republic, free from British rule, the post boxes were all repainted ’emerald green’ to represent Ireland and as a sign of independence from England (Othman, 2012). There were also blue post boxes in the 1930s for air-mail and more recently, in Great Britain in 2012, post boxes in the home towns of Olympic athletes were painted gold. With the amount of communication in the world today the need for the humble post box is almost obsolete, except for bills and birthday cards. Perhaps all post boxes will be museum worthy soon, so maybe next time, send a letter instead of an email!