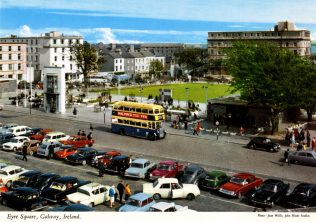 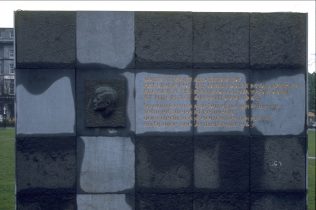 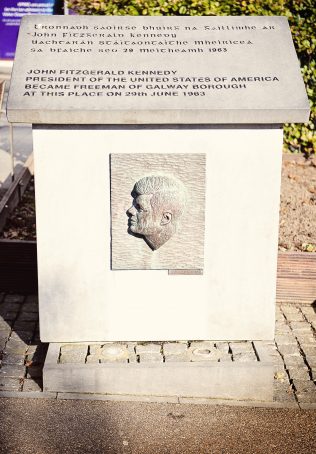 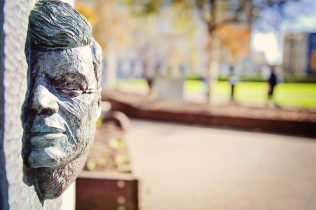 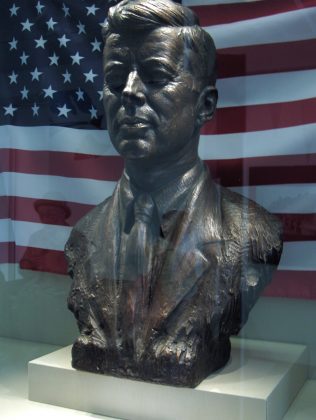 In June 1965, it was announced that the park at Eyre Square would be renamed the “John F. Kennedy Memorial Park” and that a limestone monument to the late president would be erected. In August, Cardinal Richard Cushing of Boston, in the presence of President Éamon de Valera and Taoiseach Seán Lemass, dedicated and blessed the park and unveiled the memorial monument.

The memorial monument, a limestone wall, 2m high and 3m wide, had as its centrepiece a bronze profile of President Kennedy, which was cast from a bas-relief wood carving by local artist Albert O’Toole. An inscription in English and Irish read: “John Fitzgerald Kennedy, President U.S.A., became a Freeman of Galway Borough, at this place on June 29th, 1963.”

Cardinal Cushing, the son of Irish emigrants, was a life-long friend of the Kennedy family. On the same day as the unveiling of the Kennedy Memorial, Cardinal Cushing dedicated Galway Cathedral – Our Lady Assumed into Heaven and St. Nicholas – in which there is a wall mosaic of President Kennedy.

[Kennedy] loved the outdoor life and the exquisite beauties of nature … this Park, dedicated to his memory, is a fitting memorial to him. May it inspire all of Galway, especially the young, to seek the higher things in life.”
Cardinal Cushing, Eyre Square, 1965.

In 1975, the Kennedy Monument collapsed and was removed; it was subsequently redesigned and re-erected. In the early 2000s, during the Eyre Square Enhancement Project, it was relocated to the east of the park.

Galway Cathedral, dedicated in 1965 by Cardinal Cushing, contains a mosaic of President Kennedy, alongside others of Jesus Christ and Patrick Pearse!