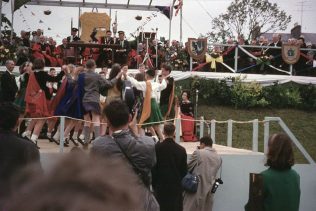 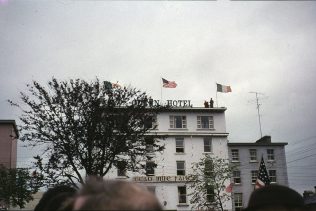 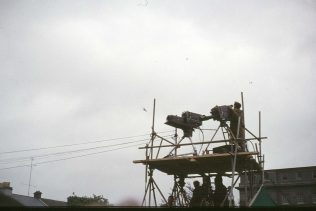 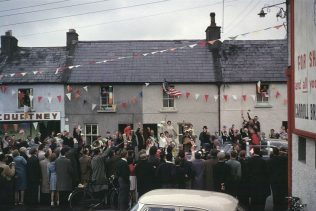 zoom
Presidential motorcade on the streets of Galway.
Courtesy of M. Kelly, Cong. 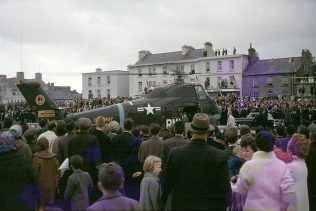 On Saturday 29 June, 1963, thousands descended on Galway to catch a glimpse of President Kennedy. Many Galwegians have clear memories of the day:

“But certainly I mean he’s the proudest son I suppose Ireland ever had.”
Seán Mac Giollarnaith

“It was kinda like the Pope coming, and maybe even more important. I seen him at the top of Dominick Street … My father shook hands with him … I remember my father always; it was kind of a boast of his that he shook hands with President Kennedy.”
Tommy Houlihan

“I was kind of nearest to the helicopter and I actually got to shake his hand and I remember thinking I’m never going to wash my hand again. But it was just great excitement and it was wonderful to be part of it.”
Ann Melia

“There was a great big atmosphere. Of course he had the people eating out of his hand, this was the Irish guy who made good, he was our man, the boss man of the United States.”
Seán Mac Giollarnaith

“There was so many people pushing and shoving to shake his hand. It was just incredible. It was kind of frightening for a child. I don’t know did I want to be there.”
Tommy Houlihan

“It was probably one of the greatest things ever happened in Galway, certainly in my lifetime and I’m almost 60 years of age now.”
Seán Mac Giollarnaith

“When the day came we went up to the top windows and I was afraid to use a camera … in case the security men … might think it was some sort of a bang bang.”
Helen Spellman

“I must say marvellous memories and the fact that I can always boast and say yeah, was there, shook hands with him … it’s a memory I won’t ever forget like, as I say, until the day I die.”
Seán Mac Giollarnaith