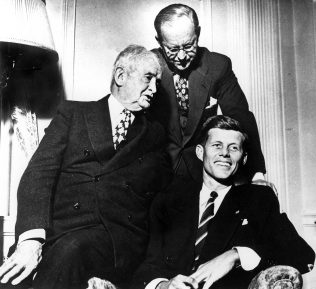 “When my great grandfather left here to become a cooper in East Boston, he carried nothing with him except two things: a strong religious faith and a strong desire for liberty. I am glad to say that all of his great grandchildren have valued that inheritance.”
President Kennedy, New Ross, Co. Wexford, 27 June 1963.

John Fitzgerald Kennedy was the great-grandson of Irish emigrants. His forbearers had fled Ireland in the aftermath of “the Great Hunger” and settled in Boston:

“Eight of my grandparents left these shores in the space, almost, of months, and came to the United States.”
President Kennedy, Dublin Airport, 26 June 1963.

Thomas Fitzgerald, John F. Kennedy’s great-grandfather, was born in Bruff, Co. Limerick in 1823 and left for the United States in the years following the potato famine. Around the same time, Patrick Kennedy, left Dunganstown, Co. Wexford, sailing from New Ross to the United States. Both men married Irish-born women and lived and worked in Boston.

The rise of the Fitzgerald and Kennedy families in Boston reflects the rise of the Irish in America. The early Fitzgeralds and Kennedys worked as coopers, peddlers and labourers, later they became clerks, retailers and saloon owners. By the end of the 19 th century, Patrick “P.J.” Kennedy and John “Honey Fitz” Fitzgerald, the president’s maternal grandfather, had become successful Boston politicians, with the latter serving twice as Mayor of Boston and as a Member of the U.S. Congress.

John F. Kennedy was well aware of and immensely proud of his Irish background:

“This is not the land of my birth, but it is the land for which I hold the greatest affection.”
President Kennedy, Limerick, 29 June 1963.