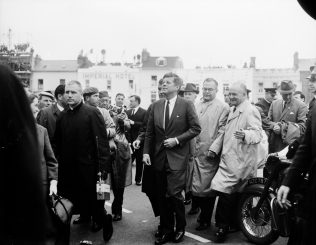 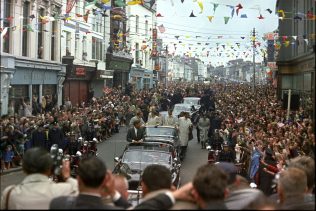 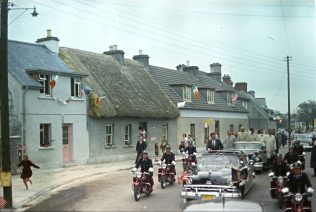 President Kennedy’s visit to Galway was brief but memorable. The President’s itinerary indicated that he would arrive at the Galway Sportsground on College Road at 11.30am, receive the Freedom of the City at Eyre Square and depart from Salthill at 12.30pm.

Although the day was overcast and unseasonably cold, from early morning the crowds began to converge on the city centre. They were joined by 600 members of An Garda Síochána who took up positions along the route.

At 11.15am the helicopters carrying the presidential entourage appeared over the city. On arrival President Kennedy, accompanied by An Taoiseach , Seán Lemass, was greeted by the Mayor of Galway, Patrick Ryan. Enthusiastic crowds lined the route to Eyre Square where the president was met with a rapturous reception. President Kennedy swept aside protocol and security and shook hands with hundreds of local people and signed autographs.

At the Browne Doorway in Eyre Square the Borough Council presented gifts to President Kennedy, including a replica of the Great Mace, and bestowed the Freedom of the City upon him. The president then addressed the public:

If the day was clear enough, and if you went down to the bay, and you looked west, and your sight was good enough, you would see Boston, Mass. And if you did, you would see down working on the docks there some Doughertys and Flahertys and Ryans and cousins of yours who have gone to Boston and made good.

I wonder if you could perhaps let me know how many of you here have a relative in America, who you would admit to–if you would hold up your hand? I don’t know what it is about you that causes me to think that nearly everybody in Boston comes from Galway. They are not shy about it, at all.

I want to express–as we are about to leave here–to you of this country how much this visit has meant. It is strange that so many years could pass and so many generations pass and still some of us who came on this trip could come home and–here to Ireland–and feel ourselves at home and not feel ourselves in a strange country, but feel ourselves among neighbors, even though we are separated by generations, by time, and by thousands of miles.

You send us home covered with gifts which we can barely carry, but most of all you send us home with the warmest memories of you and of your country.

So I must say that though other days may not be so bright as we look toward the future, the brightest days will continue to be those in which we visited you here in Ireland.

If you ever come to America, come to Washington and tell them, if they wonder who you are at the gate, that you come from Galway. The word will be out and when you do, it will be “Cead Mile Failte,” which means “one hundred thousand welcomes!” Thank you and goodbye.
President Kennedy, Eyre Square, Galway, 29 June 1963.

The motorcade then continued its journey to Salthill (via Shop Street, Dominick Street and Lower Salthill) to where the presidential helicoptor awaited. President Kennedy asked about Salthill on the journey:

As we were driving out of Galway to Salthill, it was the end of June, and we had rather unseasonable weather. The weather was fine, but the wind had turned north, and there was quite a bite in the wind. And he [JFK] said to me, “What’s this place Salthill that we’re going to?” … I said, “It’s a seaside resort.” He said, “What people would bathe in the sea when …” This was a rather cold morning. He shivered at the prospect and said, “Only the Spartans would do it.”
An Taoiseach, Seán Lemass, 1966.