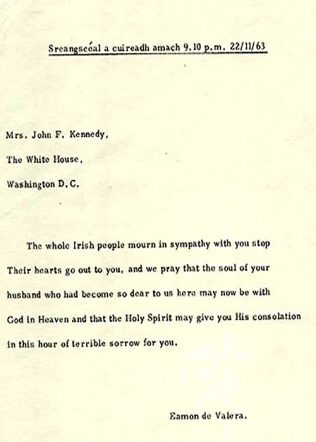 zoom
Telegram, dated 22 November 1963, from President Éamon de Valera to U.S. President Lyndon B. Johnson extending sympathies on behalf of the Irish people on the death of the recently assassinated President Kennedy.
Courtesy of the National Archives. 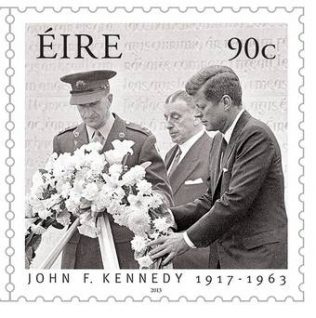 zoom
One of a series of Irish postage stamps specially commissioned to commemorate the 50th anniversary of the visit of President Kennedy to Ireland.
Courtesy of An Post.

“He [JFK] was very, very, very deeply moved by the warmth of the reception he got here. It wasn’t so much the enthusiasm of the crowd, the cheers, the general outpouring of welcome to him as what he sensed in them, meaning that there was no political significance in this. They weren’t beseeching anything from him; they weren’t asking for anything; it was just enthusiasm for himself as a person.”
Seán Lemass (Taoiseach, 1956-66), 1966

President Kennedy’s administration lasted little more than a thousand days. On the 22nd November, five months after his visit to Ireland, John F. Kennedy was shot dead in Dallas, Texas. He had been the subject of three separate death threats during his visit to Ireland. The man accused of his murder, Lee Harvey Oswald, was himself shot dead by nightclub owner Jack Ruby, on the day before the president’s funeral. The circumstances surrounding John F. Kennedy’s death remain controversial. Interestingly, Oswald had been aboard the SS Massdam, which docked in Galway Bay en route from Rotterdam to New York in 1961.