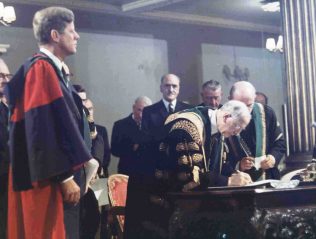 zoom
President Kennedy recieving his honourary degree from Éamon de Valera (Chancellor of NUI) at Dublin Castle. Frant Aitken can be seen in the centre of the photograph.
Courtesy of JFK Presidential Library & Museum, Boston. 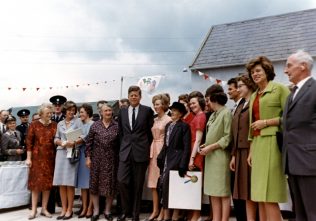 “I want to thank you for a visit that has been one of the most moving experiences of my life … I did not know ‘fáilte’ could mean as much as you [President de Valera & Prime Minister Lemass] and the Irish people have made it mean for me during the past four days. I will have the memory of this wonderful Irish welcome in my heart always … the wonderful hospitality I have been showered with has indeed made me feel that I had come home.”
President Kennedy, Shannon, 29 June 1963.

In the summer of 1963 President Kennedy undertook a 10-day tour of Europe. The President of Ireland, Éamon de Valera, took this opportunity to extend an invite to the American leader. He arrived in Dublin airport on 26 June 1963, and over the next four days visited Dublin, Wexford, Cork, Galway and Limerick.

President Kennedy’s Irish schedule was hectic. On Wednesday evening the president touched down at Dublin Airport; e arlier that day he addressed a mass rally in Berlin, where he delivered his famous ‘Ich bin ein Berliner’ speech.

The following day, he flew to Wexford where he visited his ancestral home. On 28 June, he travelled by helicopter to Cork where he was made a freeman of the city. Later that same day, he addressed both houses of the Oireachtas in Leinster House. On the final day of his visit, President Kennedy flew west to visit Galway and Limerick before departing from Shannon.

Thousands lined the streets to catch a glimpse of President Kennedy and for those who missed out, Ireland’s fledgling television station, Telifís Éireann, broadcast over fourteen live hours of the visit, while Radio Éireann provided similar coverage for listeners.