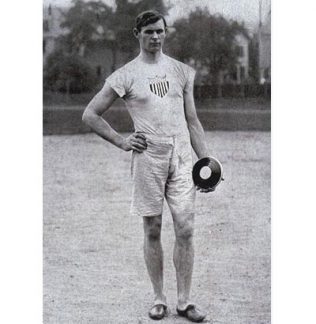 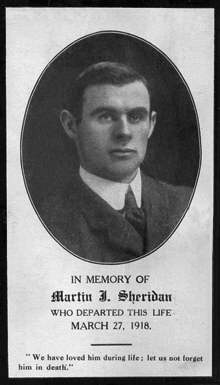 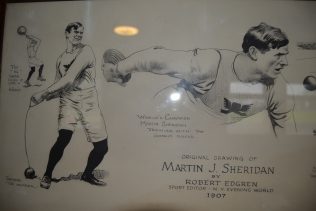 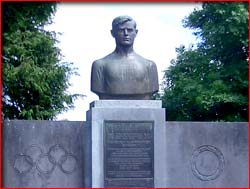 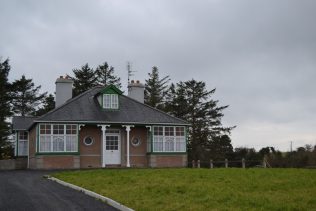 Martin Sheridan won more Olympic Medals than any other Irish athlete. 5 gold, 3 silver, and 1 bronze as well as 12 US Championships and 30 Canadian, Metropolitan and Regional Championships. He was born in the rural village of Bohola, Co. Mayo, on the 28th of March 1881 to Martin Sheridan senior and Jane Sheridan (nee Durkin). His father worked on the ninety-acre farm that he inherited from his father Patrick. There were seven children in the Sheridan family, three brothers and three sisters, Martin was the second youngest.

Joseph one of Martins elder brothers remained in Bohola and married Kitty Collins from Co.Cork a teacher, and sister to the renowned General Michael Collins, who is reputed to have visited Kitty in the local National School.

As a young boy, Martins athletic prowess was evident

In a field adjacent to the local police station, the local children congregated on a Sunday and with the assistance of the policemen who advised them on throwing techniques, Martin developed and perfected his sporting skills. In the weight throwing game, a stone was usually used and the boys competed as how far they could throw it. Martin was capable of out-throwing any of the other boys.

At the age of 18 years in 1899, Martin moved to America and joined his brother Richard. Shortly after his arrival in America Martin became an athletic instructor in the Pelham Bay Park Athletic Club. In 1906, he joined the Gotham New York Police Force. In his work as a police officer, he risked his life to save a family from a house fire. He was swiftly promoted to detective for this valiant act. Sheridan was so well respected in the NYPD, that he served as the governor’s personal bodyguard when the governor was in New York City.

Martin was introduced to athletics by his brother Richard himself a keen athlete who won the American title for the discus throw in both 1898 and 1899.

The World’s Greatest Athlete of His Time

It was not until September of 1901 that Martin was to achieve his first competitive success with the discus. At Paterson Stadium, he set his first world record in the discus with a throw of 120′ 7 3/4″. His ability as an all round outstanding athlete was incredible. On the track and field he could surpass and out-jump many other athletes who concentrated solely on these events. He competed in the American All-Round Championships in 1905, 1907, and 1909. After the 1909 championships the ‘ American Eagle’ newspaper reported in an article the following ” Martin Sheridan, the world’s greatest athlete after only two months of training realised his ambition of putting the all-round record where it will not be in danger for  some years”

Martin continued to dominate in the field of athletics

Spanning ten years from 1901 to his retirement from competitive sport in 1911, he competed in events including the discus, shot put, long jump, high jump, javelin, walk, pole vault, mile run, and wrestling. In the course of his renowned athletic career, he established 16 world records and was practically unbeatable over a 14-year period.

He returned to Ireland and his native Bohola on many occasions where he received a magnificent reception acknowledging his achievements. Martin was a modest man who it was observed felt ‘embarrassed’ when personal references were made to his achievements.

In 1912 during the course of his work as a policeman he contracted blood poisoning from a minor scratch on the side of his head. Inflammation set in which facilitated drilling into his skull in order to save his life. He never fully recovered from this illness. He refused to take ether, and it was only his physical fitness, which pulled him through. He announced his retirement from competitive sports shortly after this illness. Despite this Martin remained involved as a coach to promising young athletes.

“A Splended Type of Manhood”

Sadly the day before his 37th birthday, Martin died after having been admitted to hospital having suffered from pneumonia. Vast crowds thronged Lexington Ave. for the funeral of this modest Olympian. When the cortège arrived at the church, there were seventy-five policemen and fifty firemen who stood to attention until the casket was placed on the catafalque.

Inducted into the Hall of Fame

Martin became the first Irishman in history bestowed with the incredible honour of induction into the National Track and Field Hall of Fame in Indianapolis, Indiana. This was undoubtedly a fitting tribute to an athlete who had achieved so much in his short sporting life.

Many of his trophies and medals are on display in The O’Dwyer Cheshire Home, Bohola. His pole vault can be seen along with other memorabilia in Bohola Community Centre.