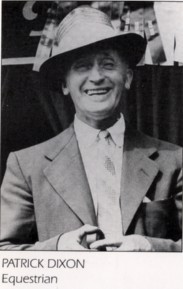 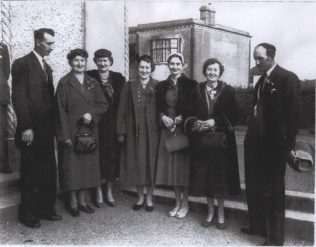 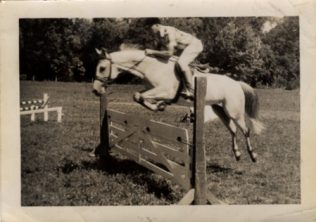 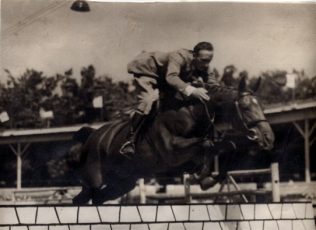 zoom
Pat riding "All a Fire" for the USA
Dixon family 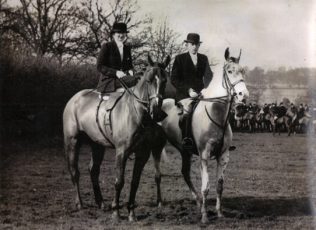 Pat Dixon, the second son of Delia and Patrick Dixon was born in 1910 at “Devlin”, Ahena, Claremorris, Co. Mayo. Pat began his riding career in 1925 with Oliver Dixon, his uncle. Oliver Dixon had a large sales and show stable in Reading, England where Pat both showed horses and fox-hunted horses for Oliver.

From 1936-1944, Pat managed and showed hunters and jumpers for Fred Pabst, the owner of Pabst Blue Ribbon Beer. There were a dozen brood mares, four stallions and a string of show jumpers which were successfully shown by Pat in the Wisconsin and Illinois area.

From 1944-1946, Pat served in the United States Army. At Fort Riley, Kansas, with the rank of Sargeant, Pat defeated his commanding officers with the horses they had shown in previous competitions. Pat won the General Patton Memorial class. Mrs. Patton presented the trophy to him.

In 1946, when he was discharged from the United States Army, Pat came East to manage the horse division of the H.E. Millard Lime and Stone Company. While shown for Millarden Farms, Pat won championships in Pennsylvania, New Jersey, New York and Deleware.

In 1951, Pat won the jumper championships at all of the eight A rated shows on the Pennsylvania circuit. The eight competitive shows included Philadelphia National, Bucks County, Devon, Lancaster, Three Oaks, York, Hanover, and Quentin. Devon is the largest outdoor show in the United States. Horses and riders come from all over the United States to compete. In the 1951 show at Devon, Pat won eight out of ten classes on All Afire and Injun Joe. Pat joked and said “I won the other two classes at Devon the following year!”  In 1951, at Devon, Pat retired the Brian Boru Trophy which had been in competition for twelve years, in 1951 on All Afire, in 1953 on Injun Joe, and in 1955 on Bedford.

Pat garnered the most championships on All Afire, a brown, thoroughbred gelding by Big Blaze, out of Thirty knots, by Man-O-War. All Afire won the championship at Madison Square Garden Show in 1959 and 1951. All Afire was the first horse to be crowned champion both at the Pennsylvania National and at Madison Square Garden in the same year. All Afire was one of the greatest jumpers of all times. He was both consistent and had a great heart. Injun Joe, by Muchacho de Oro, a registered palomino and out of a little chestnut thoroughbred mare Lu Lu Leah, was often reserve champion to All Afire. When Injun Joe was sold to Hugh Wiley, a member of the United States Jumping Team, he was renamed Nautical as he had an anchor J brand on his jowl. Walt Disney made a movie of Injun Joe, “The Horse With the Flying Tail” Other show jumpers included My Goodness, B-Pex, Bedford, Reno Residue, Helzappin and High Calcium.

Pat past away 1988 at the age of 78. He left a wife, Ellen Dixon, a daughter, Kim Erin Dixon and two sons-Patrick Dixon lll and Michael Dixon. In 1996, Pat received the most prestigious award when he was posthumously elected into the Equestrian Hall of Fame. Pat was the first equestrian inductee. This award was a fitting honour to culminate his memorable equestrian career.

Pat Dixon dominated the open jumper division for three decades. His equestrian career was multifaceted. Although he was mostly known for his extraordinary skills in show jumping, he had foxhunted in Ireland, England and the United States; he rode point-to-point races; he trained horses for side saddle; he broke polo ponies and he drove four-in hand coaches.

Pat was idolized by child riders and was equally respected by his peers both in the United States as well as abroad. Pat’s skill, determination and patience allowed him to leave a mark on the Show Jumping World as a “Master of the Sport” and an asset to the entire horse industry.

The expert Horsemanship continues among Pat’s relatives. His nephew Cormac runs Claremorris Equitation Centre and Cameron Hanley is an international show-jumper who has represented Ireland on many occasions. Another son Carl Hanley has a riding School in Dusseldorf.