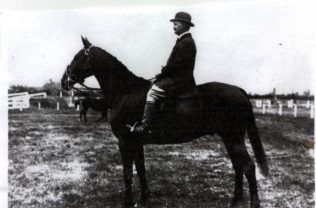 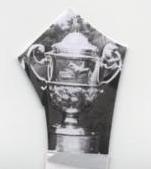 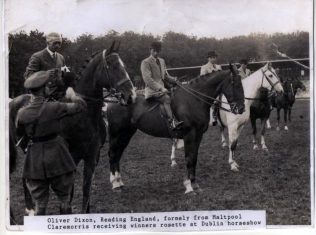 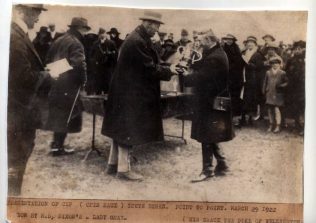 Oliver Dixon was born on the 29th June 1869. He was the second son of Thomas Dixon( B.1847) and Ellen Staunton(B. 1846) of Maltpool,  Claremorris. The Dixon family had been connected with the horse business for generations. Even when he was very young he had a great interest in horses he rode his first winner in Ballindine when he was just eight and half years.

When Oliver was about fifteen his talent for judging a horse was spotted by Michael Donovan, a horse dealer who used to buy horses from his father. Michael originally from Cork brought him to England to work at his establishment in Reading. By the age of twenty-one he was foreman of his Michael Donovan’s yard. They used to import 500-600 horses from Ireland annually at that time. In 1891 he married Michael Donovan’s sister-in-law, a Lucy Connett from Shute in Devon, and got a share in the business. Shortly afterwards Michael Donovan died and he acquired the whole business.

Acknowledged as one of the finest judges of horses in his day, coupled with sheer hard work, he rapidly expanded the business. He moved the establishment to a site off the Wokingham Rd. outside the town of Reading. His home “Mock-Beggar” Whiteknights Road was adjacent to the yard. Oliver Dixon was a prominent huntsman in England and won many prizes as a show-jumper rider. He judged the ‘Hunter Classes’ at many of the big agricultural shows in England.

In 1887 he was very successful with a pony called “The Rabbit”. He also rode ‘Point-to-Point’ and ‘Steeplechase’ with great success. His best known mounts were “Bunthorone”, “Cusholoe”, “Mavouriline”, “Tatcho”, and “First”. But his best horse was probably “Master Rayston” who won  three point-to -point in one week. He used to ride most of his own horses.

In 1903 in the Open Race at Staff College Point-to-point and Steeple Chase meeting there were 20 starters of which five belonged to Oliver and they took the first five places with the winner a horse called First.  He had a magnificent selection of trophies. He won more than 30 cups at point-to-point meetings and a much greater number at shows in various parts of England. He attended the ‘Dublin Horse Show’ as a buyer and bought several horses. One of his favourite purchases was “Bubbles” after it won the Dublin championship several years running.This horse was 22 years old when it died in 1933.

Royal Personages Amongst His Clients

Mr. Dixon sold horses to numerous well known stable owners throughout England and on the Continent. One of his most illustrious sales was made to the Queen of Spain who paid him a visit on the 19th November 1920. He also sold horses to the Crown Prince of Germany, the Duke of Windsor and Mussolini.

Oliver had three sons and one daughter, his oldest son Oliver Howard Dixon (b.1892) inherited all his father’s love of horsemanship. He won several open races on a horse called Alberta 11 with his father coming second on the horse Hop Rob. His second son Thomas Charles Dixon (b c1895) rode several winners. He won the Sir Robert Wilmount Cup at East Becks Horse Show for the best rider under fifteen years for two years in succession. His third son was Denis and his daughter was Mrs. Irene Garton.

His wife Lucy and son Thomas Charles killed in World War 1 predeceased him. After his wife died his niece, Kathleen Dixon took charge of his house. Oliver died suddenly on the 2nd April 1939 at his residence “Mockbeggar” at the age of 69 years. He had attended at Aldershot point-to-point meeting the previous day where three of his horses won. His requiem mass was held at St. James Church in Reading. The large congregation were well represented by dignitaries of church and state, royal personages and military personnel.

His obituary in “The Sporting Life” (3rd April 1939) said “No man had more friends and it can be truly said that he never lost one”. He was a devoted Roman Catholic all his life and he maintained a Chapel in his residence. His generosity was legendary and he supported the local churches and many charities. He never forgot his roots and he had a deep lasting love for Claremorris, his home town. He donated the Oliver Dixon Gold Cup to the Claremorris Show in 1927 and it was valued at £16,000 in 1984 (present day value 80,000 euro). It is something that his relatives and community will always cherish in that area. Five months after his death World War II erupted and his establishment was acquired by the military.

The expert horsemanship continues among Oliver’s relatives. His grand-nephew, Cormac Hanley runs Claremorris Equitation Centre and Cormac’s son, Cameron Hanley is an international show-jumper who has represented Ireland on many occasions. Another son Carl Hanley has a Riding School in Dusseldorf.