You are here: HomenextExplore our archivenextTopicsnextOur Christmas Memorabilia: tell us about your treasured festive itemsnextHumpty Dumpty

A Memory of Christmas 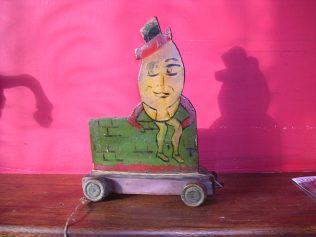 It was great to live in Dromahair because that was in the north west and it always snowed there at Christmas time. And as well as that O’Hara’s shop was just up the street from our house and every year Santy came to their shop window and stayed for ages.

Every day when I was coming home from school I went to O’Hara’s shop window and there was always a crowd of people from our school there. Santy never moved even one bit  and he had the toys spread out on the window where we could see them. There were two different kinds of guns, a bow and arrow  and a train and loads of dolls and other things. And there was a timber Humpty Dumpty painted on a wall and he was on four timber wheels.

I hoped I’d get the gun with the holster because I wanted to be a cowboy like Kit Carson or Hopalong Cassidy  when I got big and anyway my big brothers had guns like that and they were always playing Cowboys and Indians. But when Santy came he brought me the Humpty Dumpty and of course all my brothers and sisters laughed and said I was only four and Humpty was for babies. I hated being the youngest in our house because everyone thought you were just a baby. And anyway how did Santy know I was only four.

And then some of my friends called to our house and one of them had the bow and arrow and another got a gun called a rifle just like the one Buck Jones had in the cowboy comics. I pretended I was getting a train set and I told them that Santy was going to drop it into our house when he was on his way back to the North Pole. Enda was firing the arrow up in the air and once it landed on our roof and stayed there. It just served him right for showing off.

But all that was nearly seventy years ago, the guns are long gone and forgotten  and now I like Humpty. And sometimes when I am alone in the house at Christmas time I take him down from his shelf and play with him.