You are here: HomenextExplore our archivenextTopicsnextOur Christmas Memorabilia: tell us about your treasured festive itemsnextMother passes: 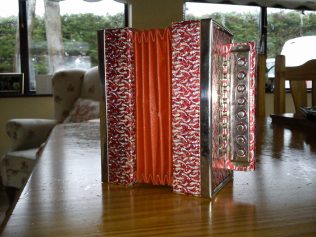 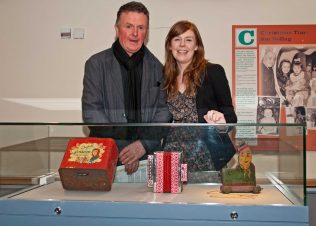 My name is Gerry Murphy. I grew up in Kells, Co. Meath with two brothers Noel and Harold, my elder by 6 and 4 years respectively.  During my early childhood, my Mother Betty would become unwell from time to time. At these times of ill-health, my mother would move in to her childhood home just 2kms away in Loyd, Kells, to be nursed by her mother (my grandmother). During these times, I went with her and was looked after by my grandparents as my father worked long hours.

On the 10th December 1965, my Mother Betty passed away at the age of 30 years old. I was just gone 9 years of age. After her passing, I remained with my grandparents. That Christmas, just 2 weeks after my Mother’s passing, my Santa presents arrived in my grandparents’ home.

Some 40 years after my mother died, my father was clearing out the attic and found a little toy accordion in a simple cardboard box. He knew straight away what it was, where it had come from and who it was for. He remembered that my mother Betty had bought it earlier in the year before she died in preparation for Christmas…it had meant to be my Christmas (Santa) present for that year.  During the turmoil of her passing, everyone had forgotten about it.

When my father showed it to me, I couldn’t believe it. It meant so much to me and the rest of the family because it was a link to her after all these years. It was great to show my own son and daughter. Even though they were adults at that stage, it was a link to their grandmother whom they never had the opportunity to meet. We take it out now from time to time amongst ourselves or to show visitors and tell the story. It inevitably sparks a conversation about my mother and other stories that I can remember of her; little gems of a life past which are invaluable to me and my family. We will always remember her but every time we see the little accordion it makes us think about and miss her that little bit more.