You are here: HomenextExplore our archivenextTopicsnextOur Christmas Memorabilia: tell us about your treasured festive itemsnextThe 'Christmas Box' 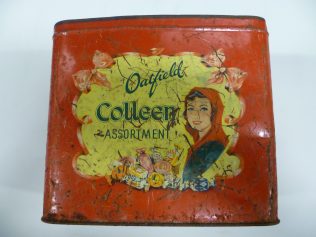 My memory is trolling back through the dust of distant years to the 1950s and fondly remembered events leading up to Christmas. One abiding memory is that of the “Christmas Box”. Times were hard in Ireland and rarely, we as a family ever received anything except what was earned by the sweat of father’s brow. In those years he had a serious illness and the workload fell on the generous broad shoulders of my mother.

Two weeks before Christmas, she used cycle 15 miles on her Raleigh to the nearest big town, Castlebar, especially to “buy the Christmas.”  Extra one off provisions such as port, sherry wine, whiskey and goods relating to baking, treacle, mixed fruit, spice, currants and raisins would be purchased. The weekly trade was done at our gate a few days before Christmas with the local traveling shop. That year my mother had sold eggs, butter and bottles (empty ones!) to the shopkeeper and purchased necessities: flour, bacon, tea, sugar, Fry’s cocoa, rinso, soap, hair oil and razor blades!

Being the youngest I was often allowed accompany her down the “boreen” to the travelling shop. As Christmas was nigh, I knew that the Shopkeeper would be extra generous and reward my Mother for her yearlong business with the traditional “Christmas Box”. That he surely did! As well as the few boring basics there were the specialties – a giant red candle that would illuminate the window of our house to the world on Christmas Eve. A Calendar which would hang on the dresser for the following year -  A copy of Old Moore’s Almanac which was a bible to my father – a giant Orange and some red apples (very different from our “cookers” and crabs”), a tin of Colleen Sweets and some three-penny bars of Cadbury’s Dairy Milk Chocolate!

Constant pleading, hectoring, begging and tantrums had blackmailed my mother to concede to me a generous haul of the treats long before we reached our front door. Older siblings moaned and groaned but I enjoyed more than my fair share of “the Christmas Box”.