Primary Competition: In my grandparent's time.... 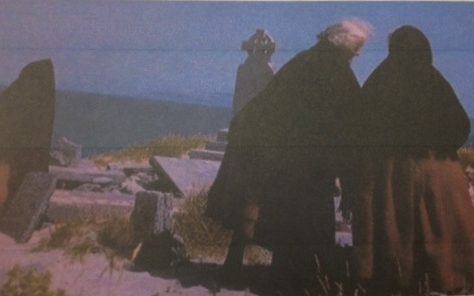 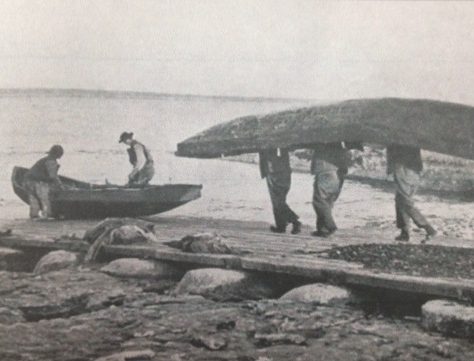 Currach being carried to shore.

Tara’s book about her grandmother Máire is very interesting with lots of great stories and pictures. A great insight into life on Inis Oirr.

My name is Máire Conneely and I was born at home, the same as all my brothers and sisters. My mother was helped in childbirth by the local women; there was no hospital or doctor available. Home was on Inis Oirr, the smallest of the three Aran Islands. I spent my whole childhood on the island, and only left for the first time when I was sixteen.

Tell me about your family.

There were eight children in my family, four boys and four girls. I was the eldest girl so had a lot of responsibility to look after the little ones. My father was a fisherman and we spent many nights worried about him out on the rough sea. My mother worked hard in the house and looked after us all. She also grew vegetables and kept hens. When I was about 12, my mother went to America to work as a nanny, she left for 2 years. She often said she didn’t know how she came back; she loved it so much in Boston.

Tell me about school.

We would have to walk a mile or two to get to school. The school was situated on the highest hill on the island. I was told it was built there by the English when they were in power and the reason it was built on the hill was to make it awkward for the children to get to school. They would have preferred the children to remain uneducated. My favourite school memory was getting a new school I didn’t have to walk up that big hill anymore. Every child had to bring a sod if turf to school with them and this would be used to hear the classroom. We would get mil and brown bread at break. There was no secondary school on the island and if you wanted to go past primary level you had to go to the mainland and go to boarding school, and being the eldest girl I had to stay at home. My younger sister Sarah got chosen to go, I was so jealous.  I helped out at home when my mother went to America for two years and I then got a job in the knitting factory on the island making socks. A TD from Galway visited the island at one stage, looking for cotes. He told me if I ever needed any help, to come and visit him in Galway and he gave me his address. I kept that address like it was a lottery ticket.

One shop on the island.

We didn’t’ have much. But we knew no different. There was one small shop on the island but all we really need to get from the shop was flour sugar and tea. Everything else we either grew in the ground, caught in the sea, reared on the land or baked over the fire. My mother used to send me to the shop and it was a job I loved. Sometimes there would be a delivery of bread. Shop bought bread was a luxury we never got. I used to pinch a corner off a loaf when the fear an siopa had his back turned. Oh it tasted so nice. I got caught eventually but I don’t think he was mad at me. He told me years later he used to watch me from the reflection of the weighing scales. I remember buying a packet of USA biscuits out of my first wage packet. I ran down to the beach and ate the whole packet on my own. I didn’t want to share with all the folks at home. What luxury!

We all had our jobs to do.

Collect water from the pump. Help sow potatoes, cabbages and onions. Gut and salt the fish my father caught. Bake bread. Collect seaweed. The list was endless. The seaweed was collected to put into our fields to make soil. Because of the rocky terrain on the island, all of the soil you see today was painstakingly made by the hard work of the inhabitants. The fields were full of stones which were used to build the many walls that separate the fields.

But we knew no different and every family as the same. We also had to make our own clothes, knit our own jumpers and socks and even make a little leather shoes called pampooties. We were very sufficient.

The island was our playground. We had sand, stones, water. We didn’t have toys or board games. We would play on the beach, on the rocks, gather periwinkles. The neared thing to a toy would be handmade dolls that we would make out of the old sacks that the flour came in. At Christmas we might get some pencils or fruit or chocolate in our stockings.

Life was simple and uncomplicated for us children. My parents worked very hard though and in all weathers. The winters were fierce and the storms were both magnificent and terrifying. Everything was dictated by the weather.

Leving the island for the first time

I was sixteen, I left wearing the traditional clothes for a woman. A big red felt skirt, a blouse and a shawl. I was also wearing hard shoes which I would not have been used to. The streets of Galway felt very strange under my shoes. The moment I stepped off the boat in the docks of Galway, I felt like a country hick; my clothes, my shoes and my hair. I came to Galway to stay with a cousin but my mother had given me half a crown to spend as I wished. I felt in the pocket of my big red skirt but alas I had lost the coin. I was so upset I ran into the neared church and prayed to God to send me some good luck. I never found my coin but I remembered that I had the address of the Galway MP I found his house and we to his door. He answered the door and asked me what I wanted, and what I was doing there. I told him I wanted a job as a nurse. He told me he would do his best but wasn’t to hopeful as I never gone to secondary school. I had never done any exams. He spoke to the matron of Galway hospital and somehow she agreed, I started training the following September. I was very lucky.

My sister and I both ended up in London in the 1950’s working as nurses. Only one brother and sister stayed on the island to live.  Sarah and I ended up in England and the rest of my siblings went to America where they settled down and married.

Trips home for them were infrequent. We made many trips to the island with our children, whole summers spent there in the easy going atmosphere of island life.

We were both coming from England so used to nearly pack up the whole house. It would take nearly three days to travel by train, boat, train then boat again to the island. We took so long getting there we made it worth our while and stayed at least six weeks. If the weather was good, we would stay even longer. IT was an annual pilgrimage.

The currach was a familiar sight on the waters of the west coast. This was the type of boat my father would go out fishing in day and night whatever the weather. It is a wooded frame boat with animal skins of hides stretches over the frame. Unbelievably not many islanders could swim. And there was no such thing as life jackets. Many a life was lost to the sea. Such on story night in 1960, the steam trawler Plassey, while sailing through Galway Bay, was caught in a very bad storm. She ran into the rocks at the side of the island. All eleven crew were rescued by local islanders. A second storm a few weeks later washed the boat further up into the rocks were she sites today. She is now a tourist attraction, especially since she is now shown on the opening credits of Fr. Ted.