Primary Competition: In my grandparent's time... 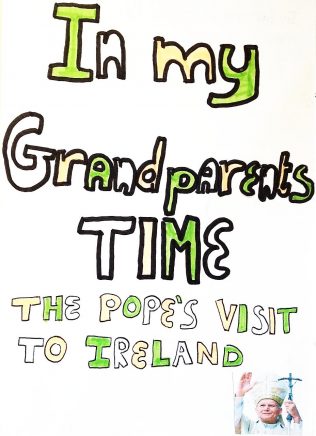 In her own words Bridie Rafter tells me about the Pope’s visit.

In 1979 the Pope arrived in Ireland. For months beforehand a lot of preparation took place. It was the first and only visit of a pope to this country, everyone was so excited, as the day drew closer people talked of nothing else, the papers, radio and television.

We waited to get a glimpse of him

The day arrived a cold miserable day. We got to Knock at about 2.30am. We left the bus at 12 o’clock midnight. We had to walk a couple of miles as traffic was not allowed into the village of Knock. Things did not go as planned and for some unexplained reason the pope did not arrive in Knock until in the afternoon. When the mass was over it was to late for him to take a tour amongst the people that waited so long to get a glimpse of him. I must say we were all very disappointed we didn’t get a very good look at him.

At this stage it was getting dark and no one knew where to find transport to begin our journey home. I must say it was many years before I returned to knock again it was a very disappointing day, we didn’t get to see the pope just a white figure on the altar. He was to far away and we could barely hear him. I think the people who stayed at home got a better look at the pope and definitely heard him much clearer than we did. He seemed a very saintly man. I must say we did recite a lot of rosary that day, no sooner one Rosary was over and another one started. It was a day I will not forget as long as I live, we did survive. The toes and bones were sore for a few days, we got home at 11am. I was delighted to lie down and have a good sleep.

The history of the football in the parish goes back to 1809 with a club called Erris Dillons, Kilcommon managed by John Ryder a school master in Glenamoy, but there was no more history until 1887 then a team called Kilcommon won a number of Erris titles. From 1974 -1977 there was no club affiliated in the parish, some players played with other clubs. Then in 1978 men like Anthony Deane (RIP), Brendan Maloney (RIP), Philip Irwin and Pat Healy got together to from Glenmoy GAA club and entered the team in the North Mayo Junior championships. The first taste of success came in 1979 when they won the North Mayo exclusive cup three years in a row 1980, 1981 and 1982. They won their first junior championship in 1982 and went on to the county final but lost to Carramore.