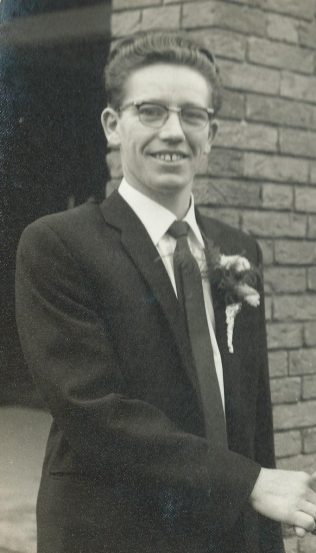 zoom
My grandad's name is William Browne. He lives in Derrygorman. He is 75 years old. 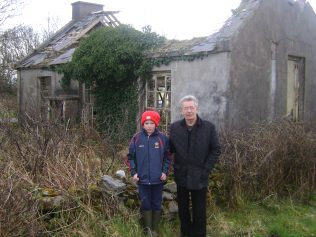 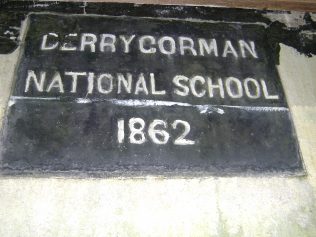 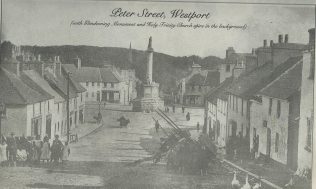 zoom
Grandad has seen many changes to Wesport town over the years. 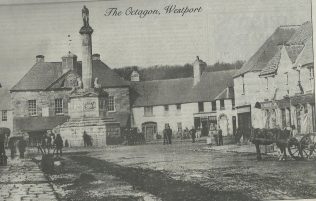 zoom
An old photo of the Octagon, Westport. 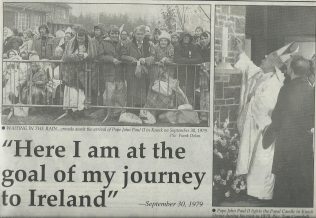 zoom
Grandad went to Knock with my granny and great granny to see the pope when he came to Ireland. 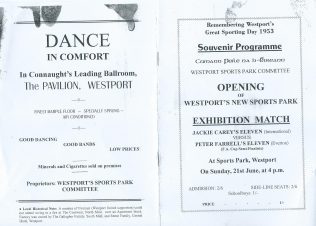 zoom
Leaflet for a dance in Westport in 1953.

Alan’s entry about his granddad, William Browne is really well thought out. We especially liked the photograph of Alan and William outside the ruins of the old school and all the articles about historical events his grandfather witnessed.

Well done Alan for all your hard work and research!

My granddad went to a country school in Derrygorman. The school opened in 1862 and closed in 1976. There was two teachers Mr. Padraig Mc Laughlin and Miss Sweeney. There was just one room in the school. There was about twenty-five pupils in the school. One teacher taught in one half of the room and the other teacher taught in the other half. All the children in the school were in the same room. He learned English, Irish, math’s, history and geography. They didn’t use biro’s they used a pen with a nib on it and dipped it into an ink well. There was no TVs. Computers, mobile phones, school uniforms and there was no central heating. All the children used to take it on turns to bring turf to school for the fire.  In the summer time they used to walk to school in their feet. Grandad lived near the school and they all walked to school every day. There was no school transport or cars. The ruins of the school is still there. This is a picture of the ruins of the school my Grandad went to.

He lived in Derrygorman. He lived with his mum, dad, sister and four brothers. They had a small 3 bed roomed house.

Grandad liked to play handball and football. Grandad and his friends used to get together and play football every Sunday. There was a ball alley at the back of the town hall in Westport and they played handball there.

He ate rabbit stew, bacon, cabbage, potatoes, vegetables brown bread, eggs and porridge  . They grew their own potatoes and vegetables. They had hens and they got their eggs and they milked the cow for milk. Grandad mum used to bake the bread.

Grandad worked on the farm when he came home from school. When he was fourteen he finished school and he went to work in Myles Staunton’s shop and store on James Street in Westport. Grandad worked in the shop first and then when he was seventeen he drove their delivery van to the country shops delivering wholesale.

When grandad was twenty-one he went to England to work. He worked as a lorry driver. He stayed in England for ten years working and then came back to Ireland.

They had cows, calves, hens, a donkey and a horse on the farm. They had a pet dog as well.

The money was very different in my grandad’s time. There was shillings and halfpenny. I don’t understand the money from that time at all.

Changes to towns and villages:

The towns and villages were much smaller when grandad was young. There wasn’t many shops in Westport. There was no big factories. There was no tar on the roads and hardly anyone had a car. They went to town on a bicycle or a horse and cart. There were only a few houses in Derrygorman where he lives.