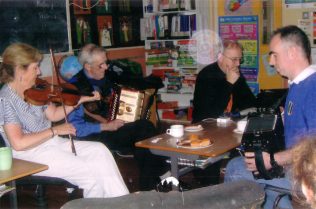 My Grandad Pasty was born on the 4th February 1930. He was from Kiltormer. He played the accordion which he learned to play by ear. He played music for many years with the Kiltormer ceili band. He wrote his own music and made two C.D’s They were called The Chestnut Tree and The Black Berry Bush. He was also a farmer and sowed his own vegetable garden.

My Grandad Andy was born the 8th December 1935. He was from Barntown, Co. Wexford. He liked singing songs, He sang The Old Bog Road, Island In The Sun and Fr. Murphy. He also sowed a vegetable garden.

My Granny Margaret was from Loughrea. She worked in O’Dea’s Hotel in Loughrea before she moved to Kiltormer in 1963. She has seven children, six boys and one girl. She got M.S and had to live in Kiltormer Nursing Home.

My Granny Eilish was born the 5th of September 1942. She is from Wexford. She had 6 children, four boys and two girls. She trained as a nurse in England. She moved back to Wexford and got married.