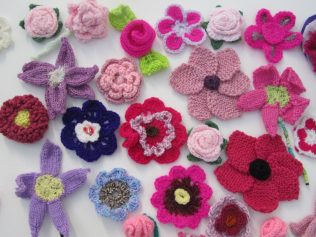 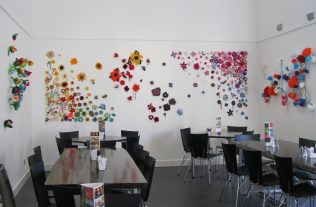 The Knitting Circle at the National Museum of Ireland – Country Life started up in 2008 and has grown from strength to strength each year. The very first meeting in 2008 started with four people. There are now up to fifty seven people on the registration list!

The Knitting Circle has been very pro-active during their time at the museum. They helped break a Guinness World Record last year by joining 1,147 other knitters, knitting for 15 minutes none stop in Hyde Park Stadium, Roscommon. The group has been involved in a number of charity projects including making hats, scarves and booties for the Simon Community.

The museum invited the group to take part in the May on Our Doorstep project and they were very enthusiastic from the beginning. Members made six flowers each and some made many more! Of all the groups they contributed the most flowers. The flowers are both knitted and crocheted in an array of colours.  The Linenhall Artists made a wonderful display of the flowers in the Café at the museum. Members shared their own memories of May Day Customs which can be viewed on this website in the ‘May Days Past’ Section.

‘The making of flowers for May Day was a project that was most enjoyable and one which we were proud to be invited to do’.

Join the Knitting Circle on the first and third Friday of each month from 11am -1pm. All levels welcome! Exchange patterns, learn new techniques, bring along your knitting!