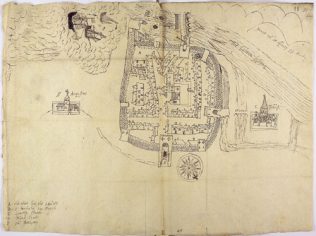 zoom
'A plot of the town of Galway' by Barnaby Gooche, 1583.
Courtesy of the National Archives, UK.

Galway, a city steeped in history…

At the mouth of the River Corrib as it meets Galway Bay, stands Galway. This modern city has at its heart, the fabric of the original medieval settlement. Over the centuries, people have used this location to establish and develop a town, which became one of the most important trading posts along the western seaboard in the medieval period. Galway has a rich and complex history. Archaeological excavations in the city have revealed the story of the walled town and the earliest buildings, including the de Burgo castle first built in 1232 and the Red Earl’s Hall constructed in the late 1200s or early 1300s.

What’s in a name?

The origin of the name ‘Galway’ from the Irish ‘Gaillimh’ is uncertain. One theory suggests that the name derives from the Galway (Gaillimh) River, now the River Corrib, from the Irish words ‘gall’ and ‘amh’ meaning ‘stony river’. According to local legend, the town is called after Gaillimh or Galvia, the daughter of the mythical king Breasal, who drowned in the river.

Little is known about Galway before the 12 th century. At that time in Ireland the country was divided into kingdoms, each with its own king who in turn was subject to the high king of Ireland. Galway first appears in recorded history as the place where Toirdhealbhach Ó Conchobhair, king of Connacht erected a fortification at Bun Gaillimhe (‘the mouth of the River Galway’). Made from timber, it was destroyed and re-built several times. At that time, the area around the present city formed part of the territories controlled by two local families loyal to Ó Conchobhair; the O’Flahertys to the west of the river and the O’Hallorans to the east.

Arrival of the Anglo-Normans

In 1169-70 Anglo-Norman settlers from Britain arrived in Ireland. They made their first claim on Connacht in 1196 when a grant of the province was made to William de Burgo. In 1230, William’s son, Richard de Burgo fought with the Gaelic Irish at Galway but was forced to withdraw. De Burgo returned in 1232 and built the first stone castle in Galway. By 1235, Richard de Burgo had conquered the entire province of Connacht. Richard’s son Walter (who died in the castle at Galway in 1271) is credited with establishing the walled town at Galway having granted the citizens their first mural charter c. 1270, which allowed them the right to levy tolls on goods to finance the building of the town walls.

HARDIMAN, James (1820) The History of the Town and County of the Town of Galway, from the earliest period to the present time. Dublin: W. Fold & Sons.