The Tribes of Galway 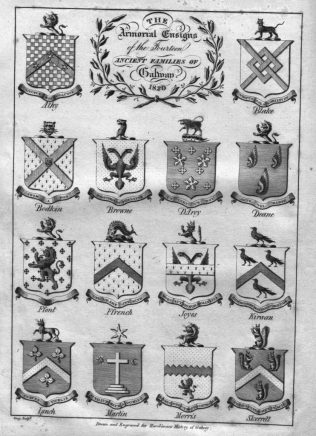 zoom
Armourial Ensigns of the 14 Ancient Families of Galway.
(Hardiman, 1820)

The ‘Tribes of Galway’, a term reputedly coined by Cromwellian forces, were the merchant families who effectively ran the town of Galway from the 15 th to 17 th centuries. The fourteen families were mainly of English or Welsh origin (part of the original Anglo-Norman settlement) with the Kirwans and Darcys of Gaelic origin. Located in a predominantly Gaelic area, they gradually became integrated into the Gaelic way of life, adopting the local manners and customs.

The settlers played an important role in the establishment and development of Galway town by commissioning public and religious buildings and developing trade networks. The families prospered through trade with the Gaelic hinterland, Europe and later the Americas. They were involved in all aspects of society from the governance and administration of the town to church affairs. These wealthy merchants built many grand houses filled with elaborate furnishings and fittings. Two of the fortified town houses survive; Blake’s Castle built in the 1400s and Lynch’s Castle built c. 1500.

Galway’s and the Tribes’ prosperity ended with t he Cromwellian siege and occupation in 1652. Many of the families were ousted from the town. The new settlers to the town were promptly allocated some of the ‘Tribes’ property. When Charles II was restored to the throne in 1660 he ordered the re-instatement of property to those who had surrendered in 1652. Some of the old families did return and resumed trading, but the ‘Tribes’ never regained any of their former status.