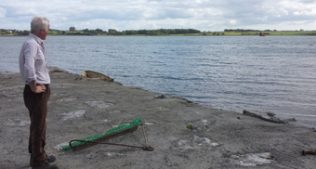 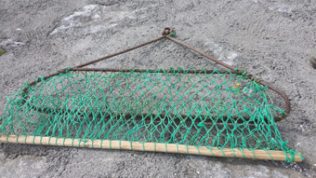 zoom
Dredge with mala and maide in place 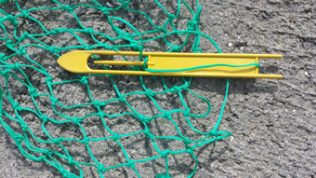 Dredge: This is a triangular metal frame with a ‘blade’ on the bottom, to which a specifically designed fishing net is attached. The blade is drawn along the seabed to dislodge oysters, which are then caught in the mála. One time local blacksmiths made the dredges for Clarinbridge fishermen, and there are still some local craftsmen skilled in making them.

Most fishing boats these days carry mechanically powered winches to aid in hauling the dredge, which was once hauled by hand, requiring at least two men to haul in a full load.

Mála Dredge – The term for the net used for collecting the shellfish from the seabed. The mála is attached to the triangular metal frame. It measures either 3 feet by 3 feet, or 4 feet by 4 feet. The maximum size allowed (by law) for a ‘mála is 4 x 4 feet. The larger it is the bigger the possible ‘catch’, but the heavier it is to haul on board.

A dredge bag is woven from strong twine. Each square of mesh is called a ‘muggle’ and measures two fingers width for native oysters (edulis), three fingers for pacific oysters (gigas).The mála is knitted by fixing one end of the twine to a nail in the wall in order to hold the mesh steady while the fisherman weaves the bag.

‘Maide Dredge’: A stick attached to the mála dredge that stops the bag coming through the dredge and fouling the blade.

Pin: The mála maker attaches one end of the twine to a nail on the wall, wrapping the other around a ‘pin’, (like a very large needle), which he holds. The twine is then woven to create small squares, in movements similar to that of crochet. The old ‘pins’ were made of timber. The new ones are plastic.

Not all fishermen weave their own dredges now, but Michael Egan’s uncle, Tommie Egan, showed him how to make them and he makes his own.

In times gone by, when many made their living from fishing (herring and mackerel as well as shell-fish) more people knew how to make and mend nets and dredges.