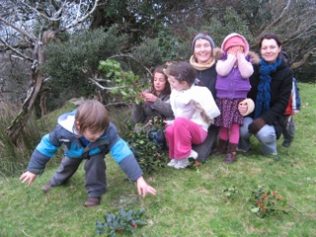 Father Gallagher, a stern man of the old school led his flock most of the time but was known to drive them when he felt circumstances demanded it. For instance he was convinced that the bible got it right where it said that it was ‘easier for a camel to go through the eye of a needle than for a rich man to enter the kingdom of heaven.’

One way of paving the way to Paradise was to contribute in generous measure to the various church collections held throughout the year. Of these, the Christmas collection was one of the most important, when the congregation and particularly the business people, were expected to give generously.

Contributors were noted and placed on a list according to the size of the contribution, the largest of course being first. This list was read out on the Sunday after Christmas and there was always great interest as the congregation listened intently to find out if Mrs. Hannon had held on to the top position, or if, maybe Myles Doyle, the Postmaster, or some other aspirant to the top spot had displaced last year’s winner.

When the moment of truth arrived the congregation shuffled, eased into a comfortable position, coughed noisily and fell into an expectant silence. The priest turned around with his list and the show started. ‘Mrs. Hannon, one pound,’ he commenced.

Well, no surprises there

We were shocked into alertness

The list went on and we lost interest as the priest reached the one and sixpences. But where was Myles Doyle, we wondered idly. His name hadn’t featured in its usual place, generally well above the ten shilling mark as befitted his status in the community. Then suddenly it came.  ‘Myles Doyle, one shilling,’ the priest read. We were shocked into alertness again by Myles diminished position on the list.

Father Gallagher read the name once and then pausing for effect, ‘Myles  Doyle — one — shilling,’ he repeated again, spacing and emphasising the words, his voice shaking with indignation as it rose several decibels. A rustle of disbelief ran through the audience. What moment of misguided misanthropic folly had allowed Myles to disturb the social equilibrium of our village? What could it be?  Both men kept cattle. Myles owned a lot of land; Fr. Gallagher had very little, and often had to resort to the ‘long acre’ for grazing. Was it true they had fallen out over a piece of land belonging to Martin ‘Fat’ Gilmartin that was coveted by both? Was Myles sending a subtle and public lesson to the priest in retaliation for what he saw as his unseemly greed?

It was the focal point of conversation in the village for weeks and we laughed as we repeated and savoured the priests emphasis.  ‘Did ye hear him —– Myles Doyle, one shilling,—– Myles — Doyle — one — shilling.’   We laughed as we mimicked the derision in the priests voice.

For those who witnessed the gladiators, the Christmas collection of 1961 ranks in memory alongside the March blizzard of ‘47 or the Night of the Big Wind of 1839.