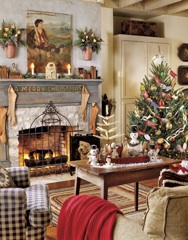 Growing up in the Dublin of the early 60’s one remembers the long warm Summers, the endless games of football using your Geansai for goals, Taylor Keith Red Lemonade, Flash Bars, milk delivered in bottles and the magical glow of Christmas.

It was a time of plenty, fragrant pine trees, smiles and Santa Claus. My younger sister Maura and I held him in the highest regard and always managed to rise early to investigate our stockings.

Our treat was to lick the wooden spoon

The preparation for Christmas began months earlier with my Mother greasing eggs and carefully wrapping them, storing them for the baking season. The making of puddings and cakes involved great pomp and ceremony, with all the precious and fragrant ingredients carefully measured out before mixing in a large bowl. Our treat was to lick the wooden spoon clean of the sweet, spicy yet creamy mixture.

On Christmas Eve we would make the much  anticipated visit to town, where a visit to Santa Claus in Clerys would be followed by a plate of chips in Woolworths in Henry Street. I can still taste those golden vinegary chips in that clattering cafeteria. Outside the traders sold “the last of the Cheeky Charlies” as darkness fell and a thousand lights began to twinkle.

Once home the Turkey then came in for special attention as it would arrive up from my Uncle’s farm in Wicklow and be left hang from the back of the shed door. We would watch in amazement as my Mother would prepare it for the oven, no oven-ready birds in those days!

Then it was the task of the youngest to light the Christmas candle “to welcome strangers” our Mother explained. Then to bed and sleep which came slowly as the excitement mounted.

Christmas Day always followed the same routine, after Church my Father took us ‘visiting’ to all our relatives where numerous bottles of orange were consumed. Then back home to a blazing fire and a late breakfast.

This is where the story gets dirty!

This is where the story gets dirty! The chimney had not been swept that Winter and caught fire covering the  dining table and our breakfast in black smuts, only the black pudding seemed to escape!

A minor panic ensued before order was restored and my little sister reassured that Santa did not get stuck up the chimney causing it to go on fire. That evening a flurry of snowflakes fell and we had our white Christmas. I felt it was God’s way of cleaning up.

That was Christmas 1962 and we were to have snow until March in what was called “the coldest Winter in living memory”. It will always remain in my memory, that’s for sure.