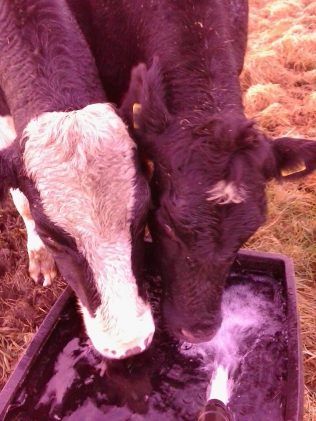 After a struggle, Ned called brusquely, ‘I’m going on the beer.’
His men kindly laced the ale with castor oil.
Walking like a duck Ned struggled to the gate and wasn’t seen for two days.
In the field the wife cried,
‘What did you do to my Neddy? The sofa and bed are ruined!’

Ned woke with a sore head. The boys would be bailing hay, might have a spare half-one of whiskey for him. Still wearing yesterday’s overalls he yanked on wellie boots and mosied along the pot-hole filled coast lane up to the farms. Fred and Slap-head saw him weaving in and out of the irritated cows. Sneakily Fred poured a laxative into his moonshine. Great craic!

After a few good slugs of the bottle Ned hobbled quickly through the gate back to his stone cottage. Aggie was furious. He didn’t make it to the outhouse. Her mother’s floral sofa was ruined.