You are here: HomenextExplore our archivenextTopicsnextGhost Stories of Ireland - Seeking Tales of the UnexplainednextAn extra passenger 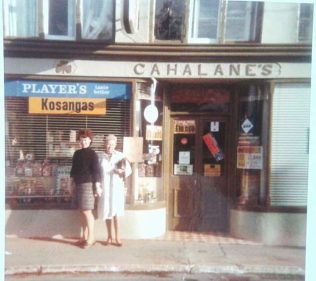 My grandfather owned the village shop, Cahalane’s, in a little village called Drimoleague in west Cork, nestled between Bantry, Dunmanway and Skibbereen. In those days he was one of very few who owned a car, the local priest would sometimes call him during the night to give him a lift to a house to give someone their last rites.

Well one night, the priest called him and asked him to take him to a rural house outside the village, he obliged, dropped the priest and waited outside in the car. It was a long time before the priest came out, apparently wide eyed and a bit dishevelled, hopped into the passenger seat and just said “drive”.

As they were driving, the priest told my grandfather it was an exorcism that was needed but he’d need to get permission and help from higher up in the Church. As my grandfather glanced over at the priest he saw a ghostly, menacing figure outside the passenger window, standing on the running step along the side of the old car and holding on to the passenger door. He glanced back to the road as he was driving and silently looked back towards the priest again and the figure was gone. I would date this to around 1960’s -1970’s

My grandfather died before I was born, but this was one of many stories told to us by my father, attaching a photo of the front of the old shop, was was later the village funeral parlour, I’m not sure what’s there now.

Cover image: By vectorpouch on Freepik