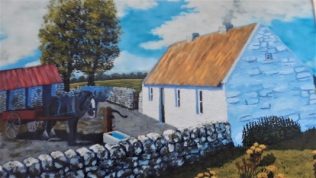 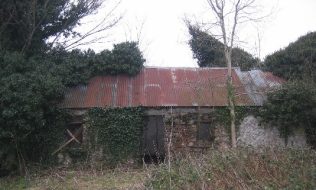 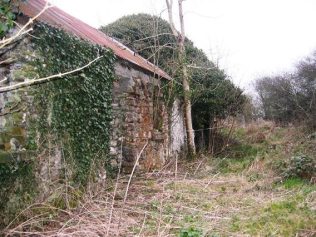 This cottage was a traditional thatched building in the Irish vernacular style divided into three rooms stretching across its full width, with the addition of a loft above the room behind the fireplace. The loft was accessed by means of a wooden ladder from the kitchen and had a small window in the gable wall. It was the home of the Connor family from the mid-19th century or earlier up to its acquisition by Bord na Móna circa 1960s.

The importance of this house lies in its connection to the activities of Active Service volunteers during the War of Independence 1920/21. What it probably looked like at that time can be gleaned from the following picture painted, conjecturally, about 2008 by artist, Michael Egan of Kilnagarnagh, with the help of the recollections of his elderly cousin, the late Josephine Connor O’Meara, who had been born and reared in this house.

It is at present in a ruinous condition with a tin roof, as shown in the following photos, dating from 2008. The house stands on an area of arable land surrounded by bog and was ideally situated as a safe house for the care of wounded or injured IRA volunteers during the War of Independence. Its use for this purpose has been authenticated by a number of separate witnesses and I summarised this in 2006 in the note reproduced below.

During the War of Independence 1919-21 (Black & Tan war) the house at Derrevane, townland of Tombeagh, was used extensively as an unofficial field hospital by the IRA volunteers. This house is situated in a derry, which is a kind of oasis or island in the middle of the bog of Lemanaghan and would have been relatively inaccessible to the motorised “Tans”. The ruin of the house is still standing, with a temporary tin roof for protection from the elements.

Apart from local folk memory of the use of this house at that time, documentary evidence from at least two independent witnesses is in existence.

1. Thomas (Con) Costello, of Kilgarvin, Ballinahown, who was Commandant of the Athlone Brigade, in his “witness statement” made to the Bureau of Military History (Document No. W.S. 1296) in 1955, wrote that following an engagement with Black & Tans at Carricknaughton on the Roscommon side of Athlone in which George Adamson was shot and wounded, he had “Adamson removed across the Shannon to a place near Ballycumber where he was nursed back to health in a house owned by relatives of mine”. The relative he refers to was Ellen Costello, wife of John Connor of Derrevane and the house is undoubtedly the one mentioned above.

George Adamson (of Moate) was afterwards a Brigadier General in the Free State Army and was killed in action in 1922 in Athlone.

2. Annie (Nan) O’Connor (nee Connor), an active service member of Cumann na mBan in Athlone from 1915 to 1923, in her APPLICATION to the MINISTER FOR DEFENCE for a SERVICE CERTIFICATE, written in 1935, states that in early 1921 “Took two wounded ASU men to my home in Offaly and got doctor for them”. Her home in Offaly was the house in Derrevane, she being the daughter of Ellen & John Connor. The doctor referred to would have been Dr. William Meagher of Ferbane, who was closely associated with the Offaly Volunteers. Local folklore has it that many other volunteers were also attended in the house, including Dan Breen, the famous Tipperary freedom fighter.

Some of this is mentioned in a recently published book entitled “They Put The Flag a-Flyin’, The Roscommon Volunteers 1916-1923” by Kathleen Hegarty Thorne. The second edition of this book has just gone to press and will contain additional material in relation to this safe haven for the volunteers.

The story of this house is also covered in the Journal of the OFFALY HISTORICAL AND ARCHAEOLOGICAL SOCIETY, Vol 9, 2016. Historian, Ciara Molloy, outlines the part this house played in the fight for our freedom in an article entitled “Cumann na mBan in county Offaly, 1915-22” (see pages 236/7).