You are here: HomenextExplore our archivenextTopicsnextTraditional Boats of Ireland’s Wild Atlantic WaynextRemembering our West of Ireland Boats: Your StoriesnextOughterard Boat Builder -Tommy Mallon 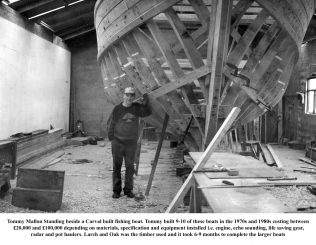 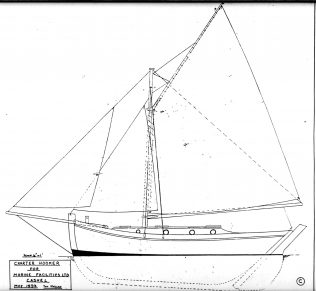 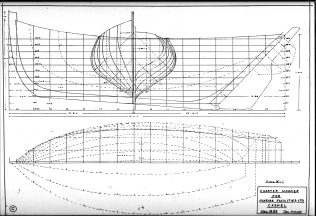 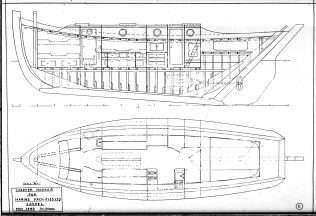 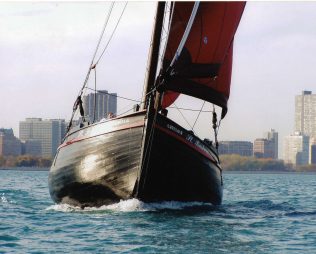 Tommy Mallon standing beside a Carval built fishing boat. Tommy built 9-10 of these boats in the 1970s and 1980s costing between £20.000 and £100,000 depending on materials, specification and equipment installed i.e. engines, echo sounding, life saving gear, radar and pot haulers. Larch and oak was the timber used and it took 6-9 months to complete the larger boats.

Tommy Mallon was born on the 31st of August 1934.  His father, James Mallon, a plumber by trade, worked in America for several years before returning home to marry Anne Farrell. They lived in Camp St.  Annie had a little shop but she eventually had to close it because of the amount of “Tick” that was outstanding.  It was customary at the time to allow people to buy goods without paying for them – this was called “Tick”. People would usually pay off their debts when the dollars or the pounds from England, or money earned from selling animals, turf, eggs or oats arrived.  The Mallons sold fish. I remember when I came to Oughterard in 1967 going down the steps into Mallon’s kitchen to buy fish from Mrs Mallon. She had a small counter in the kitchen.  She wrapped the fish in newspaper.  I bought herrings and smoked haddock from her.   Mrs Mallon bought wooden boxes of fish from fishmongers and then sold it on to the general public.  She sold it two days a week but during Lent it was for sale three days a week – this was during the Lenten Fast. Tommy says that they made a good living from selling fish.

1945 Tommy’s father James died from tuberculosis when Tommy was 8 years old.  His Uncle John Farrell, known locally as Seán O Farrell, took care of Tommy and his sister Mary who now lives in America.  John, didn’t marry and he lived with the family in Camp St. He was a kind disciplinarian.  He got very little official schooling, he was self -taught, read widely on every subject and as a result he could discuss the cultures of different countries.

At the gable end of the Mallon household John operated a weigh bridge and the large standing tripod – that is clearly shown on all the old photographs of the Oughterard Square. He charged a fee for weighing wool, potatoes and grain.  He also cut turf and often rented land to farm.   John was a very wise man and Tommy learned many valuable lessons from him. One scorching summers day when he and his uncle were returning from the bog they met an old man. Tommy said that he considered him to be a right idiot.  The man said, “Johnny the weather is going to break”.  “Is it Mike”?  replied uncle John. “Don’t mind him that fellow is only and idiot”,  said Tommy. His Uncle turned to him rather crossly and said, “Listen to the fool because, who you think is one may not be one”. The weather did break that same week. Tommy learned a great lesson that day and from then on he always listened to what people said: he was always open to new ideas and was never afraid to try new ideas in his work.

Tommy lived at a time when no one locked their doors you rambled freely in and out peoples homes. As a very young boy he went to work with Jackie Kinnevey, Camp St.  He owned a sawmill and a workshop at the end of Camp St. where a large two storey thatched house stands today. The mill was powered by steam, which was got by burning turf, sticks and timber.  He worked too with Paddy Kinnevey who owned a boatyard and workshop where the Credit Union is to day.

After finishing primary school where he was taught by Gerard Lee, Tommy’s mother encouraged him to attend the Technical school in Galway. He hitched lifts to school during the winter and cycled to Galway during the summer. He studied carpentry in the “Teck”. Tommy loved Maths and received great encouragement from his mathematics teacher Captain Wooley. One day, shortly after he had taken up an apprenticeship with Stewarts of Galway, Captain Wooley caught Tommy going into Flaherty’s pub in lower Salthill: he came in after him. “I see you are drinking Tommy”, he said.  “Will you have a drink Captain”? Asked Tommy. “I’ll have a half one if you will do something I will ask you”, replied the Captain. He asked Tommy to come down to the school of a Tuesday night so that he could talk to him.  When Tommy entered the room in the technical school the following Tuesday night he saw boys doing navigation stuff at a desk. “What are they doing”? asked Tommy. “Don’t worry, I have something better for you. I will teach you applied maths and boat design one night a week”,  he said. Later Tommy attended two nights a week between 1954-1958. He received a certificate from City and Guilds after sitting exams at the end of the course.  Obviously Captain Wooley saw the potential Tommy had for designing boats and encouraged him to pursue that great interest he had from the time he started working with the Kinnevey brothers.  Tommy has a mass offered every year for his great teacher Captain Wooley.

After leaving the Technical School Tommy took up an apprenticeship as a joiner with Stewarts in Galway in the early 50s.   He received a great training with Stewarts as the foremen were meticulous – time was not an issue with management. They just wanted perfection  in the work carried out in their premises.

After serving his time he started building his own boats in Camp St. in 1958   The first boat he build was a “Punt” –a 15 foot long narrow beam, one man rowing boat.  It was a light boat –easy to row and very safe if handled properly. This boat is still used on Lough Corrib for spring fishing.  Tommy was always deeply grateful to the assistance Paddy Mc Gauley (Curley) Baurisheen gave him in making this boat.  Padddy did not build boats himself but he had great experience in handling boats. He kept a watchful eye on Tommy to make sure he built it properly.

As the years passed Stephen Kinnevey, Roddy Joyce, Jackie Mons, Mike Toole, John Gill worked in Tommy’s boat yard. In the beginning the work was all done by hand using carpenters tools.  As Tommy made money he invested it in purchasing electric tools – saws, plains, drills etc., of course the electric tools made life a little easier. Tommy took great pride in his work and designs and derived tremendous satisfaction from his work.

To further his education and to gain experience with boats Tommy took correspondence courses in engineering and boat designs. He also spent sometime at sea.  His uncle John said to him one day “You have a foot on the ladder now you are about 3 steps up and please God you’ll get to the top but take my advice keep one foot the ground and always stay with your own”. Uncle John was a very wise man indeed.

One of the largest boats was a 45 foot boat

In the early 60s Jack Tyrell of Arklow shipyards influenced Tommy. Jack Tyrell designed a boat for Alex Moon, Glann and Tommy was commissioned to build the boat. During the building of the boat a friendship developed between Jack and Tommy. Tommy did a correspondence course on the designs of bigger boats.  There were no computers at the time and he remembers having pages and pages of calculations to grapple with. He designed and build a 28foot boat,” Celtic” This boat fished out of Cleggan for a number of years. One of the largest boats was a 45 foot boat. Boats were transported to their destinations using a trailer drawn by a jeep and for the larger boats a low loader was hired.

Ronnie Holland who owned a summerhouse in Glann encouraged Tommy to build the “Corribee”. Robert Tucker designed the first Corribee. Tommy had to make adjustments to build the boat with the result that many people thought that Tommy was the original designer.

While Tommy’s business may be considered small by international standards, Tommy gained a tremendous reputation for his extraordinary craftsmanship. In 1964 at the London Boat Show in Earl’s Court, Tommy was presented with the “Boat of the Show” award by Princess Alexandria.  No other Irish builder has won that distinction. His boat was the original Coribee 21, a design that sold well in England up to the introduction of fibreglass.  Newbridge Boats build this same design in fibreglass. With the advent of fibreglass Newbridge bought over the rights of the Corribee.

Following the London Boat Show scoop Tommy build 20 Corribees. They were of mahogany clinker construction and many of them were exported. He build a nine and a half ton “Endurance “35 cruising yacht which was build with exquisite iroko teak. Other sailing boats and crafts build by Tommy included a 36 foot fishing boat, and the “Clew Bay 14”.

Tommy built 9-10 carval fishing boats in the 1970s-1980s. They were large and cost between £20,00-£100,00 depending on the materials used and the equipment installed- engine, echo sounder, life saving gear, radar, winches and pot haulers. He used Irish oak and larch. It took 6-9 months approx. to build the larger boats.

Over the years, despite his craftsmanship, life as an Irish boat builder was not been easy for Tommy Mallon.  He admits that often times were tough but nonetheless jobs well done have brought him tremendous satisfaction.  I am glad now that people know of the awards Tommy has achieved so that the people of Oughterard can be truly proud of one of their own who brought pride and honour too Oughterard.