You are here: HomenextExplore our archivenextTopicsnextTraditional Boats of Ireland’s Wild Atlantic WaynextRemembering our West of Ireland Boats: Your StoriesnextMemories of Zulu luggers in Mullaghmore

Memories of Zulu luggers in Mullaghmore 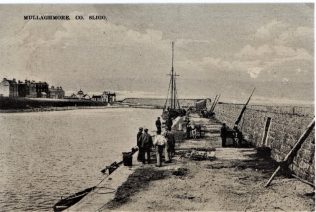 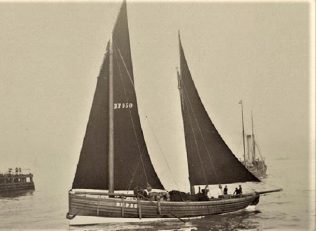 The Last of the Windjammers

The greatest era of sail in the Northwest was introduced to Mullaghmore c.1913 when, with the financial backing of the Congested Districts Board, six Zulu luggers were added to the fishing fleet there.  Designed and built in Scotland these boats became known as ‘Zulus’ as at the time of their development, c.1880, England was involved in a colonial war against the Zulu tribesmen in Africa.

Ranging in size from forty to seventy five feet long one of their more unusual features was that they carried a huge mainmast unsupported by any rigging.  Zulus had two masts and carried three sails – fore, mizzen and jib. Masts could be 60 feet tall on boats of 80 feet in length. Hoisting the sail took at least three men who would swing out over the side holding on to the halyards as they hoisted and the boat rolled.  The rudder was controlled by a heavy chain attached to a great wheel and once under the control of helm and sail men that sailed them claimed they were ‘as steady as the road’.  Deck to gunwale measured only 12 inches so there was an ever present danger of being tossed overboard in rough weather.  They were not without some comfort though as below decks they boasted a coal burning stove for heating and cooking.  Bunks were provided also and in a separate area storage compartments for fish.   Their design produced very fast boats that became invaluable to herring fishing fleets.

Manned by eight of a crew the Mullaghmore men used their new craft mostly for trawling and driftnetting; they did not consider them suitable for longlining because of their great weight and size.  For herring fishing, drift nets of from fifty to sixty feet in length per ‘sheet’ were used; floats made of cork were used on the headrope for buoyancy and stones on the footropes to sink the nets to the bottom.  A ‘fleet’ of twenty or so of these nets were fished by each boat with buoys of expanded pig’s bladders or canvas used to mark the ends.  When fishing at night the boats were sometimes tied to the end of a fleet of nets so as not to become separated from them in the darkness and to provide a respite for eating and rest.

The boats followed the shoals of herring all along the Donegal coast to Teelin and beyond Rathlin O’Beirne lighthouse and westward beyond Inishmurray and Bomore Islands.  Catches were landed at Teelin and Killybegs but whenever possible at the home port of Mullaghmore.  There they were auctioned to a waiting assemblage of ‘cadgers’ or ‘hawkers’, as the buyers were known, who would bid keenly for the fish.  Looking at the harbour now it is difficult to visualize what a busy place this must have been then as a dozen or more cadgers waited with horse-drawn springcarts or ass and pony carts for the boats to land.  When they arrived competition was fierce and tempers often frayed as bidders vied with each other for the catch.

My father, Petie Mc Gowan, skippered the Rosebud and this account of a hard night at sea was related to me many years later by one of his crew:

‘I used to fish in the Rosebud.  T’was Petie Mc Gowan yer father was skippering her at the time.  We were held up a week below in Teelin one time with a storm.  A week!  And you mightn’t believe it but a better week I never spent.

Thady Conway was in it with us, and ‘Big’ Dan Gallagher an’ Tom Cartin.  Petie came in to my house one day with a report of a big fishin’, herring there just for the takin’ across the bay in Teelin.  That’s how it started.  We got the boat ready, loaded the nets in, and off we went.  No sooner did we land in Teelin than be Jasus the storm started.  We were above in Gallaghers shop, Jack Gallaghers.  Jack is dead now but I think the family still have a shop in Killybegs there in the main street.

‘What about going to the ball’, one of them says to me.

No matter.  Into the punt in Teelin with us anyway and away across the bay to Kilcar.  Landed at the Ball in Kilcar.  We had great sport with Big Dan Gallagher, he got a few drinks in him and up with him on to the stage and gave a sermon that was a public show to God!  There was no dancing at all only Gallagher prachin’!  He was well shot from a five naggin bottle of whiskey that we got in Haughey’s in Teelin that he brought down to the boat first.  Drank the whole five naggin bottle!

Anyway, next day the storm settled and we headed out of a Thursday evening, and we shot the nets.  Bejasus, we got a great shot of herring.  Away for Killybegs with us.  We sold the herring there anyway.  Joe Molloy [Willie Joe] bought them and we took about twenty cran of mackerel to bring home.

There was a great boat in Killybegs, the Pimpernel but the Rosebud’d sail her anytime so long as she was fit to carry the sail!  But if the Rosebud had to put in the reefs, she wouldn’t bate her.  The Rosebud had a crooked mast and, whatever was about it, she’d sail the devil when she had a full sail.

I was fishing in the Drostin too’, he went on.  ‘A couple of weeks after that we went out of Mullaghmore after herring wan night and it was the worst night ever came.  I’ll never forget it anyway.   Me an’ Tom Duffy that’s dead beyond in America and Jamesy Duffy, Bernie Rourke, John Rogers and John Callery.  That’s the crew we had on her an’ Bernie Rourke’s father, Mickey Rourke.  Two luggers went out that night, the Rosebud and ourselves.

Going out by St. John’s Pt., across there at Donegal, there was two drifters laving Killybegs, the Harvest Star an’ the Gola.  Rourke wanted to follow the drifters out — if he had to get his way we were all lost!  There’s no getting out of it!  We shot the nets anyway an’ before we had the third net shot the back rope broke with the gale of wind that was in it, from the north.  We hauled all the gear into the boat at that and away for Mullagh as hard as we could.

When the two boats landed at the breakwater we couldn’t see it with water breaking over it.  We could see nothing, it was that dark.  No lights on the Quay, no nothing!  We went out about a mile off land towards Bundoran and threw out two anchors anyway, out of the Drostin.  The Rosebud was a bit above us and she threw out the anchors too.  We didn’t know how we were goin’ to get through the night but there wasn’t a hate else we could do.  Well, I never put in such a night in me life.  Pitch black, be the Jasus, an’ the sea breaking over the boats.  We never thought we’d see the light of day again.  We were sure we’d be put up on the rocks any minute!

When day broke our boat smashed the chain on one of the anchors and the other one started to drag.  The wind was from the north, fair on St John’s Point.  A livin’ hurricane!  There was nothing for it but to put the sail on her an’ away for Bundoran.  There was seven foot of water in her on the lee side.  ‘Twas going into the hold on her, an’ the mast was the same as my elbow there now, bent like that.  The Rosebud started to haul anchor too.  They ran her up on the strand right away.

When we got half way to Bundoran we brought her about an’ she came ‘round like a top.  We headed for the quay, make or break.  When we came to the breakwater her side struck it on the way in, we came that close on it.  With that, between the two quays, the sail busted in pieces.  We threw out th’ anchor an’ wasn’t it bad when she brought the anchor with her.  Now wasn’t there a quare gale in it, an’ no sail on her?  The sail down in bits an’ she dragged th’anchor even at that.  She finished up there on the wee strand at the boathouse.  It settled some time after that an’ we took the Rosebud off the other strand an’ floated the Drostin as well.’

Mc Gowan, Joe, In the Shadow of Benbulben (Aeolus Publications 1993)