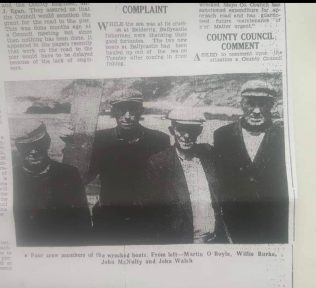 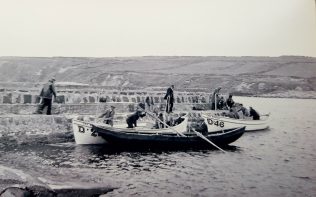 3 were built in Bord Iascaigh Mhara boat yard Killybegs Co. Donegal.
1 was built in Baltimore (made its way to Belderrig by road)

At the time there was Bord Iascaigh Mhara had a grand scheme for these boats to replace the Curraghs used for years before.

12 men from Belderrig travelled to Killybegs to sail the new boats home. These men never had an engine in a boat before and maybe never saw one. They never saw nor been on the coastline and to top things off it was a foggy day.

They got a bit of training on the workings of their new ships and had 1 compass yet they made to to Belderrig safely.

Sad end to this story is at the time there was only a small pier in Belderrig with no winch or slip. The curraghs were light so could be pulled up on the flag rocks during a storm and the new 26 footers were too heavy for that so seven weeks later the first big storm wrecked all 4 boats (3 were wrecked on the shore 1 was never saw again but its bow was found some time later)